$64.99
Caskers Rewards members earn up to 3 store points back when buying this bottle.

Size750mL Proof92 (46% ABV)
This 10-year-old Irish whiskey, which is made on Dublin’s famous Trinity Street, dates back to 1779 and was the very first whiskey to be trademarked. 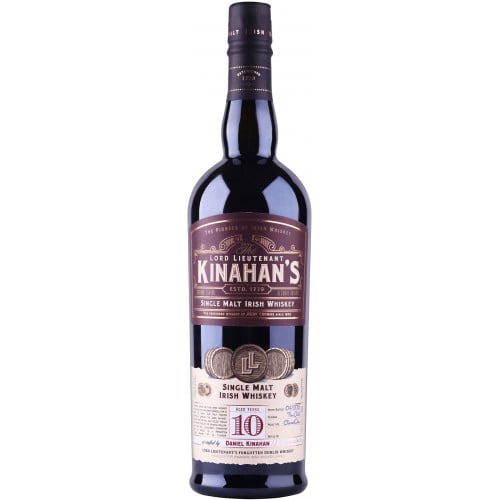 By 1845, the whiskey had received its first royal warrant and was so popular (and imitated), that it became the very first whiskey to be trademarked. By the mid-19th century, Kinahan’s L.L. whiskey came to the attention of many American connoisseurs, including Jerry Thomas, "the father of American mixology." In his 1862 classic, Jerry Thomas’ Bartender Guide, Thomas recommended the use of Kinahan’s over any other whiskey.

The Irish whiskey industry experienced a sharp decline in the early 20th century, and the Kinahan family decided to take a break from production. A century later, in 2014, Kinahan’s Irish Whiskey reopened its doors on Trinity Street with the sole purpose of bringing back "a forgotten Irish whiskey".

Kinahan’s 10 Year Old Single Malt Irish Whiskey is matured exclusively in ex-bourbon barrels for a minimum of 10 years. After sampling the whiskey cask-by-cask, Kinahan’s Malt Master selects only those casks which are as mellow, rich and flavorful as the original Kinahan’s Irish Whiskey produced centuries ago. Once the casks have been selected, the whiskey is bottled at 92 proof without the use of chill-filtration.

As a result, Kinahan’s 10 Year Old Single Malt Irish Whiskey has a bright aroma of cherry cola and cereal grains, which leads to a palate filled with tropical fruits, especially mangoes and pineapples, as well as cracked pepper and black tea. The finish is exquisite with notes of fine tobacco, smoked meats and malted barley.

This is the first time Kinahan’s Irish Whiskey has been available in nearly a century — pick up a bottle of this classic whiskey today!

Bright aroma of cherry cola and cereal grains, which leads to a palate filled with tropical fruits, especially mangoes and pineapples, as well as cracked pepper and black tea. The finish is exquisite with notes of fine tobacco, smoked meats and malted barley.