Learn more
Size750mL Proof104 (52% ABV) *Please note that the ABV of this bottle may vary
Only 144 bottles of this limited edition single malt whisky, which was aged for 15 years in ex-bourbon and ex-wine casks, were ever released in the United States.
Notify me when this product is back in stock. 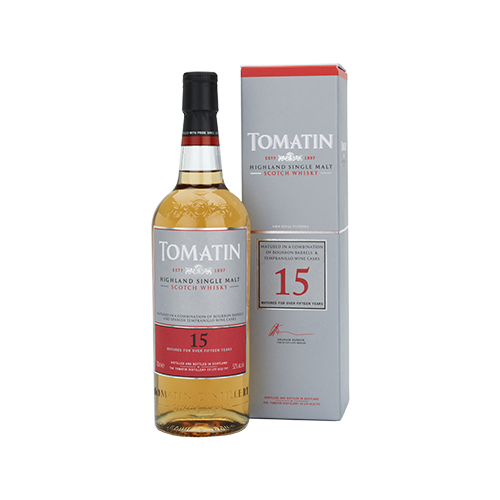 Tomatin 15 Year Old Limited Edition Single Malt Scotch Whisky is made from plump, Scottish barley. After the barley is harvested, it is mashed and fermented before being distilled twice through Tomatin's copper-pot stills. The stills have a round, flat shape that gives the whisky a rounder and sweeter flavor profile, notes Douglas Campbell, Tomatin's master distiller. Campbell, who began working at the distillery in 1961, joined Tomatin as an accountant, doing clerical work. "After that, the managing director, John McDonald, took me under his wing and gave me the chance to work in different parts of the distillery. I did mashing for three or four years, distilling for a couple of years, worked in the warehouses. Eventually, I was one of the charge hands getting casks ready for dispatch."

Once Campbell has distilled the whisky, it is matured for twelve years in casks that were previously used to age bourbon. While most Tomatin casks are stored in a modern warehouse where the barrels are stacked on top of each other, Tomatin Limited Edition expressions are stored in the distillery's original, dark warehouse, allowing the whisky to age more evenly. After its initial beautyrest, the whisky is double-barreled, or finished, for a minimum of three years in casks that were previously used to age wine made from Tempranillo grapes. Tempranillo grapes are a type of black grape native to Spain that are known for their aggressive flavors and full body. The wine casks add notes of dark berries, plums, tobacco and dried fruits, and complement the whisky's hints of vanilla, chocolate, caramel and bananas. "The combination of flavours and aromas achieved by the use of these differing casks is fantastic," says Graham Eunson, Tomatin's Distillery Manager. "There's always a sense of anticipation and excitement when you experience a potential new whisky for the first time and in this case, those emotions were well justified."

Only 144 bottles of this limited edition single malt were ever released into the United States market. Pick one up today!

Aroma of dried fruits and salty popcorn. Hints of vanilla, milk chocolate, nutty caramel, poached pears and bananas that give way to notes of berries and warm pepper. Finish has lingering spices, with touches of nutty dough, oak and cream.