Size750mL Proof92 (46% ABV)
Balblair 15 Year Old is a single malt Scotch whisky from one of Scotland’s oldest distilleries. Matured in American oak ex-Bourbon casks, followed by first fill Spanish oak butts, this balanced whisky is bottled at 92 proof. Whisky Advocate picked it as one of its Top 20 Whiskies of 2020. 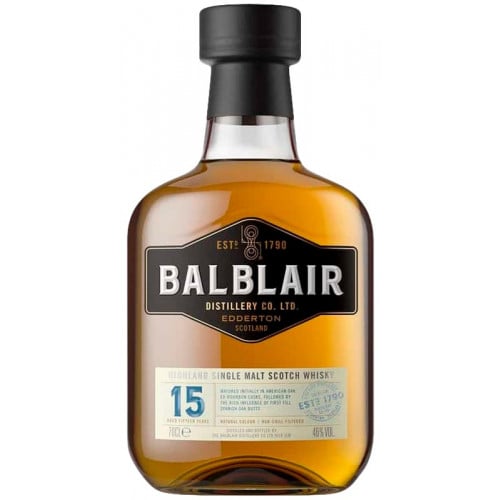 Balblair, founded in 1790 by John Ross, is one of the oldest distilleries in Scotland. The distillery was operated by the Ross family until the late 19th century, when James Ross gave up the tenancy of Balblair to Alexander Cowan, a wine merchant from Inverness. In 1911, Balblair ceased its distilling operations, and in 1932 the last whisky from the era was bottled. In 1948, Balblair resumed production under the stewardship of Robert James "Bertie" Cumming, a solicitor from Banff, who purchased the distillery for £48,000 a year later. In 1970, he sold the company to Hiram Walker, and throughout the 1980s extensive investments were made in the development of the distillery’s facilities. The distillery, located in the Highland village of Edderton, was acquired by Inver House Distillers in 1996.

The production of Balblair’s single malt Scotch whisky can be characterized by passion and patience. Balblair’s Distillery Manager John MacDonald says that "making whisky should be a craft, not a process," and the team follows his philosophy down to the letter. They honor century-old traditions by distilling at their own naturally considered pace, and create their whisky with care, dedication and experience, and always remain focused on the quality of the end result, not quantity. Respect for the whisky is reflected in every step of its making. Before they are left to rest, the casks are hand-stenciled and dated by the men who filled them. In 2019, the distillery released a new range of age-statement expressions that range from 12 to 25 years, each unique but all showing the true highland spirit.

Balblair 15 Year Old is a stunning single malt Scotch whisky that calls for quiet admiration. The spirit is initially matured in American oak ex-Bourbon casks, followed by the rich influence of first fill Spanish oak butts. The whisky is non-chill filtered and bottled at 92 proof.

The nose starts with the aromas of leatherwood honey and spicy gingerbread, followed by juicy prunes and fresh lemon peel. The palate is velvety, bursting with dark chocolate, tropical fruit and spices. The finish is long and mellow, with notes of creamy vanilla and citrus.