Size750mL Proof92 (46% ABV)
Only 12,000 bottles of this whisky, which was finished in a combination of French oak casks sourced from esteemed cooperages that previously aged wine, will ever be produced. 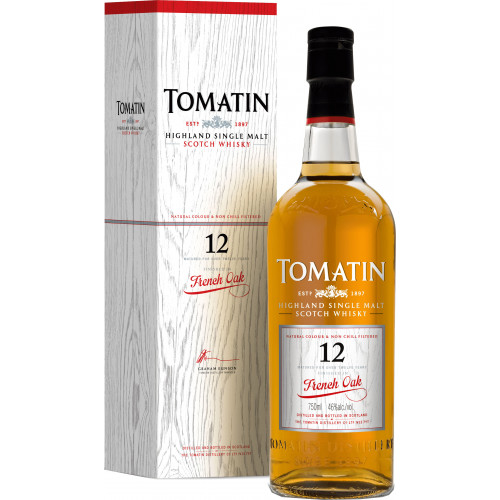 Tomatin Single Malt Scotch Whisky is made from plump, Scottish barley. After the barley is harvested, it is mashed and fermented before being distilled twice through Tomatin's copper-pot stills. The stills have a round, flat shape that gives the whisky a rounder and sweeter flavor profile, notes Douglas Campbell, Tomatin's master distiller. Campbell, who began working at the distillery in 1961, joined Tomatin as an accountant, doing clerical work. "After that, the managing director, John McDonald, took me under his wing and gave me the chance to work in different parts of the distillery. I did mashing for three or four years, distilling for a couple of years, worked in the warehouses. Eventually, I was one of the charge hands getting casks ready for dispatch."

Once Campbell has distilled the whisky, Tomatin 12 Year Old French Oak Single Malt Scotch Whisky is matured for nine years in ex-bourbon hogshead casks before spending an additional three years in French oak casks sourced from European cooperages including Lafite, Vicard and Seguin Moreau. These special casks, which previously contained wine from Bacalhoa winery (formerly owned by Rothschild), were then de-charred and re-charred before being filled with Tomatin whisky, giving the whisky a semi-sweet nose of fresh biscuits and coconut, along with aromas of peaches, candied nuts and hard candy. The palate is extremely delicate, with notes of fruitcake, sherry, cloves and butterscotch, and leads to a refreshing, simple finish accented by fresh cream, baked apples and pie crust.

Only 12,000 bottles of this whisky, which is only available in North America, were ever produced — pick up a bottle today!

Semi-sweet nose of fresh biscuits and coconut, along with aromas of peaches, candied nuts and hard candy. Palate is extremely delicate, with notes of fruitcake, sherry, cloves and butterscotch, and leads to a refreshing, simple finish accented by fresh cream, baked apples and pie crust.