This product is available in: CA, IL, MN, NY Unfortunately, we can't ship to PO Boxes and APO addresses.

Size750mL Proof86 (43% ABV)
Aged for a minimum of 16 years, this whisky was named the "Best Single Malt Whisky" at the San Francisco World Spirits Competition in 2013.

This product is available in: CA, IL, MN, NY Unfortunately, we can't ship to PO Boxes and APO addresses. 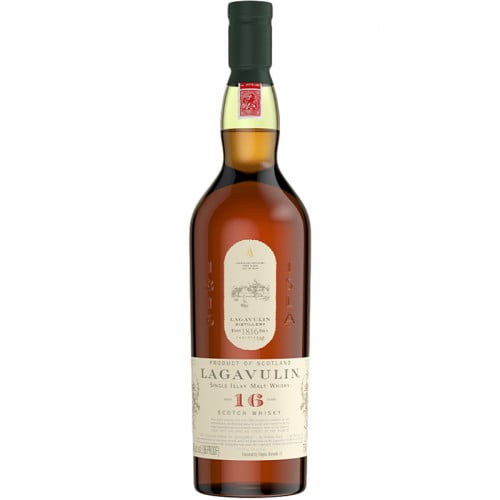 Following distillation, Lagavulin 16 Year Old Single Malt Scotch Whisky is matured for sixteen years in second-fill, American oak casks that were previously used to mature bourbon. As a result of this maturation process, together with the unique barley-drying process used at the distillery, the single malt has an intense aroma of peaty smoke, wood spices and Earl Grey tea. The aroma gives way to notes of peat, rich smoke and salty tang on the palate, which are balanced by subtle notes of vanilla and honeyed oak. The finish is incredible and intense, with complex notes of sweet caramel and fruits belying bolder notes of peat and smoke.

Pick up this timeless classics today!

Intense aroma of peaty smoke, wood spices and Earl Gray tea. Notes of peat, rich smoke and salty tang, which are balanced by subtle hints of vanilla and honeyed oak. Finish is incredible and intense, with complex notes of sweet caramel and fruits belying bolder notes of peat and smoke.

4.5 out of 5
(6 reviews)
Write a review
Real email address is required to social networks
Sign in
Login with Google
Login with Facebook
Or
We also recommend