Size750mL Proof93.6 (46.8% ABV)
Matured in double first fill sherry-seasoned oak casks, this whisky was named ‘The Best Spirit’ of the year by America’s foremost expert on distilled spirits, F. Paul Pacult upon its debut.
Notify me when this product is back in stock. 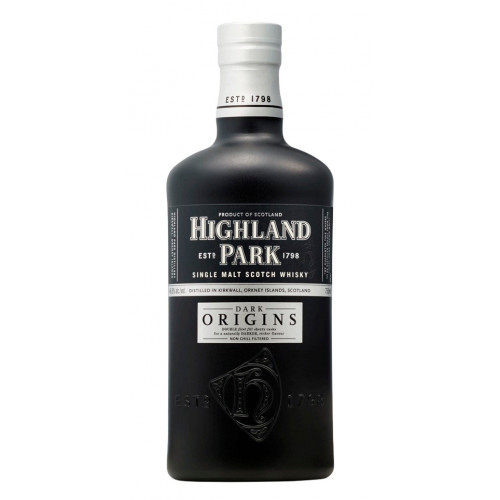 Highland Park Dark Origins Single Malt Scotch Whisky pays homage to Magnus Eunson, who founded the distillery. During the 18th century, Eunson worked as a butcher and church official during the day, but illegally distilled and smuggled whisky at night (legend has it that on Sunday's, Eunson would hide in the pews of his church in order to avoid British tax collection agents).

While the sherry casks provide Dark Origins with only a slightly copper-reddish color, they bring a bold aroma of cacao, toffee and fruit to the whisky. Notes of heathered smoke, dark chocolate, and ripe fig dominate the rich palate of Dark Origins, and lead to a finish accented by touches of sherry and vanilla.

Highland Park Dark Origins "offers a different take on the typical Highland Park profile,"notes Bloomberg, "with more sweetness and spice layered on top of the soft smoke, and the distinctive finish Highland Park lovers look for." In addition, the whisky "represents a bold new direction for the company"(according to Drink Spirits) and is "a worthy tribute to a rebel" (according to Forbes). It was named ‘The Best Spirit’ of the year by America’s foremost expert on distilled spirits, F. Paul Pacult upon its debut.