Size750mL Proof88 (44% ABV)
This unique yet timeless expression is aged for 18 years before being finished in some of the finest Premier Grand Cru Classé Bordeaux barrels.
Notify me when this product is back in stock. 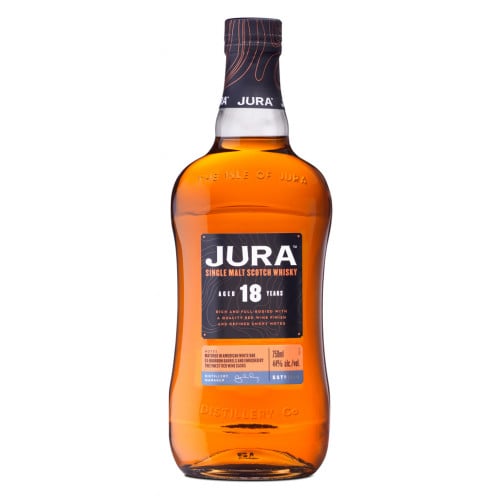 The Isle of Jura Distillery was founded in 1963. It is the only distillery on the Isle of Jura, which dates back to 1810 as being the first licensed distillery on Jura. The distillery sources its water from Loch a’Bhaile-Mhargaidh and is owned by independent bottlers Whyte & Mackay. Situated sixty miles off the western coast of the Scottish mainland, the Isle of Jura is one of the most sparsely populated islands in Scotland — it boasts 5,000 red deer, 200 human beings, two churches and just one distillery.

Jura Single Malt Scotch Whisky is made from Scottish barley, which is milled at the distillery and mashed with hot water to release its natural sugars. Once the barley has been mashed, it is fermented and then distilled through Jura's 28-foot tall copper-pot stills. Jura malts are typically aged in bourbon casks, with some whiskies being finished in sherry. Their whiskies are really said to come of age around 16 years; this is when the whisky really starts to shine.

This exciting and new line of Jura whiskies can be described as a hybrid of Highland and Island styles, a harmony that imparts a sweet smokiness onto the spirit. Due to Jura’s unique microclimate, each year yields its own character, beautifully impacting every spirit. This timeless 18 year old Jura is matured for eighteen lengthy years in American White Oak ex-bourbon barrels and finished in some of the finest Premier Grand Cru Classé Bordeaux barrels. A truly unique spirit, aged to perfection.

Aromas of toffee, tropical fruits and cinnamon on the nose. On the palate are rich flavors of black forest fruit, cocoa and coffee.