Size750mL Proof100 (50% ABV)
With 40ppm, it's as heavily peated single malt as the name suggests, yet this 2012 Port Charlotte vintage has exceptional balance. Crafted with barley from 8 Islay farms from the 2011 harvest, it was matured in first-fill bourbon and second-fill wine casks before being bottled at 100 proof.
Notify me when this product is back in stock. 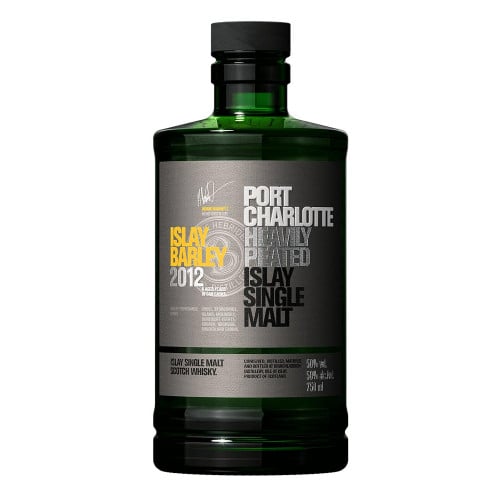 Bruichladdich Port Charlotte Whisky is made exclusively from heavily peated barley from the Inverness Shire region. After the grains are milled and mashed, they are fermented in the distillery's original washbacks, which are made of Douglas Fir. The wood from the washbacks absorbs heat generated during fermentation and allows for a longer, slower fermentation process compared to steel, resulting in a more flavorful and rich whisky. After fermentation, the wash is distilled twice through Bruichladdich's 130-year-old, 20-foot tall, diamond-shaped stills.

The 2012 vintage of the Port Charlotte Heavily Peated Islay Single Malt was crafted with 4 barley varieties: oxbridge, publican, propino, and concerto from the 2011 harvest, coming from 8 farms. As the name suggests, it's a heavily-peated whisky with 40ppm (phenol parts per million). The maturation consisted of first-fill bourbon barrels (75%) and second-fill wine casks (25%). Bottled at a hefty 100 proof, it's a balanced smoky, briny, zesty, fruity, and sweet expression.

Balanced and fresh, the whisky has brine, lemon zest, apple, and pears on the nose, followed by floral, vanilla, malt, and peat aromas. It's soft on the palate with a pleasant sweetness, honey, vanilla, cedar, black pepper, and smoke. Finishes with coconut, peat, and a touch of almonds.