Learn more
Size750mL Proof92.6 (46.3 ABV) *Please note that the ABV of this bottle may vary
This 10-year Tobermory won a Gold medal at the San Francisco World Spirits Competition.
Notify me when this product is back in stock. 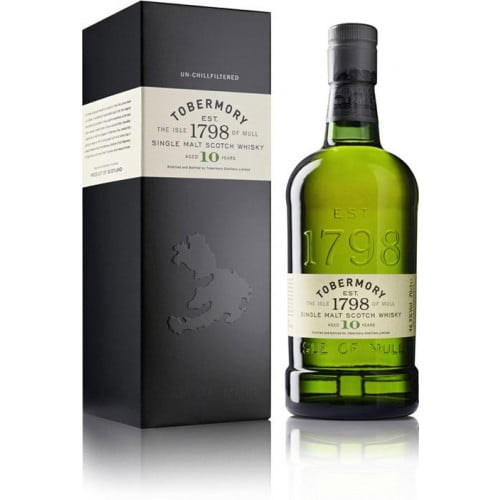 Tobermory is located on the Scottish island of Mull, in the village of Tobermory. The distillery was formerly the Ledaig facility and is the only distillery on the entire island. Founded in 1798, Tobermory has changed hands several times, and undergone a significant number of closures. The distillery was established in 1788 by the British Fisheries Society. Until then the town had been a small farming settlement, built around the medieval church at the top of the hill.

In 1797 a local kelp merchant named John Sinclair applied for the lease of 57 acres of land on the area known as Ledaig, for the purpose of distilling. However, distilling was banned in Britain between 1795 and 1797 in order to conserve grain stores for the War of the First Coalition with France. Sinclair’s application was subsequently rejected, but he was granted permission to build a brewery. Through sheer perseverance, a year later Ledaig Distillery was established.

The distillery built a strong reputation over the next hundred years, but the Great Depression and Prohibition saw a fall in whisky demand, and the distillery was mothballed for over 40 years. Finally, in 1971, the Ledaig Distillery (Tobermory Ltd.) came back with a bang, reopening with a limited edition release. But the economic climate of the 1970s proved unfavorable, and the distillery fell upon hard times one more. The future of the distillery was continuously dotted with highs, lows, and further closures. By the 1980s the distillery warehouses were being converted into flats.

The distillery was brought back to life in 1993 after it was purchased by Burns Stewart Distillers, and the distillery has since become the pride of the island. At Tobermory they still do things the traditional way; by hand. One of the oldest commercial distilleries in Scotland, Tobermory is unique, from its idyllic location to its equally alluring, single malts- the fruity, unpeated Tobermory and the more robust and smoky Ledaig.

Tobermory uses optic barley sourced from several Scottish malt makers, but is meticulously selected by their own master distiller. The barley is soaked in fresh water for two to three days and then spread out on the distillery floor to germinate for one to three weeks (depending on the season). The barley is constantly monitored, turned and tended, and as it germinates, it is infused with the distinct sea mists of Mull. The barley is then milled in a traditional Porteus mill to the Master Distiller's exact specifications. They distill their whisky using the same techniques they used over two hundred years ago, using two wash stills and two low wines stills.

The steeply inclined s-shaped lyne arm of their stills gives heavy reflux which leads to more refined notes in the spirit. It is only the middle distillate, or ‘Heart of the Run’, which is deemed pure enough for collection. Incredibly, smooth and velvety, Tobermory’s 10-year-old hand-crafted signature unpeated expression is matured for 10 years in ex-bourbon casks. The slight peat influence gives a unique character to the smooth notes of fruit and spice. This Tobermory bottling proudly embraces the past, paying homage to long and resilient history. Bottled unchill-filtered at 46.3% ABV in a signature green glass. The release also won a Gold medal at the San Francisco World Spirits Competition.

Rich island character with tantalizing hints of grass, malt, gingerbread, stewed fruit syrup and finely polished oak on the nose. The palate is gloriously smooth and velvety. An electric tang of fruit, sublimely spiced gingerbread, acacia honey, and aniseed give a sophisticated sweetness that is absolute paradise. On the finish, ginger and spicy oak meet with bitter chocolate and almond before gently fading with the sweetest sea salt.