Learn more
Size750mL Proof94.4 (47.2% ABV) *Please note that the ABV of this bottle may vary
This Whisky is all about showing you how approachable premium Spirits can be. This is an incredibly approachable, accessible, and easily enjoyable Speyside Whisky that was matured in first-fill American oak barrels. Prepare for plenty of vanilla-forward notes, complemented by fruity notes, lavender, and sultanas.
Notify me when this product is back in stock. 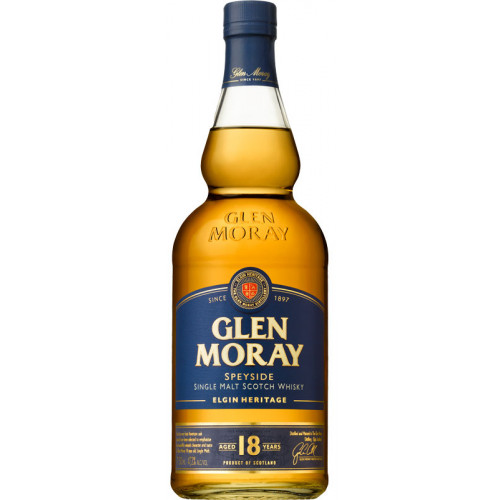 Part of their Elgin Heritage range that shows you how approachable their Whisky can be, Glen Moray Heritage 18 Year Old Single Malt Scotch Whisky brings to the table an incredibly approachable, accessible, and easily enjoyable Speyside flavor profile. It was matured in first-fill American oak barrels, so get ready for plenty of vanilla-forward notes, complemented by fruity notes, lavender, and sultanas. Savor neat, on the rocks, or with a few drops of water.

Light gold hue. The nose is both light yet bold with floral notes followed by warm roasted nuts, harvest grain on the stalk, and a distant fruit. The palate is warm, clean, and a tad dry with notes of walnut-apple salad, lemon zest, toasted oak, and spice cake. The finish is medium with more lemon zest and a note of Christmas cake.