Size750mL Proof120.2 (60.1% ABV)
The 2020 Edition of Laphroaig's 10-year-old single malt is an uncompromising and full-bodied Islay whisky that is bottled at 120.2 proof ― the natural distillery strength.
Notify me when this product is back in stock. 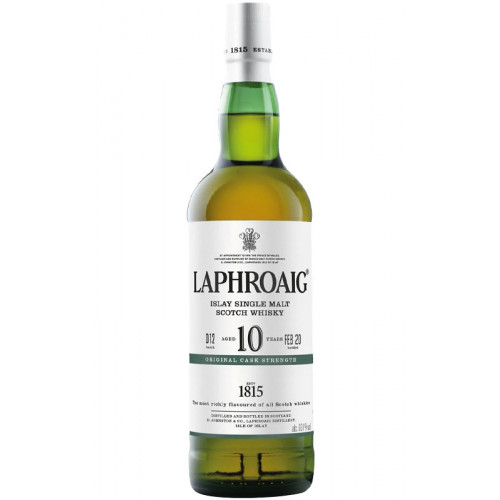 Laphroaig Single Malt Whisky is one of the most flavorful and intense whiskies made anywhere in the world. During Prohibition, it was one of the few whiskies still legally imported into the United States, as it was considered a medicinal spirit. Laphroaig Single Malt is made from the finest Scottish barley, which is malted at the distillery and smoked over a peat flame. Unlike other distilleries which source peat from the Scottish mainland, the peat used to smoke Laphroaig barley is made from the heather, mosses, and lichens of Islay and adds a distinct iodine-like flavor to the whisky.

After the barley has been malted and peated, it is fermented before being twice-distilled through Laphroaig's copper-pot stills. The unique stills have an unusually flat base and flat surfaces, which lends to the overall intensity of the whisky. After the whisky has been distilled, it is aged in seasoned oak barrels, which are re-charred prior to being filled. The re-charring process caramelizes the remaining sugars in the barrel, and adds slightly sweet notes of vanilla and nutty dough to the whisky.

Laphroaig Cask Strength 10 Year Old Single Malt Scotch Whisky is aged for ten years in the distillery's warehouses, which are situated along the shores of Loch Laphroaig. As a result, the whisky is imbued with a slightly salty tang that compliments the whisky's notes of peat and vanilla. The 2020 Edition Cask Strength is bottled at 120.2 proof ― the natural distillery strength. Over the years, the various iterations of the Cask Strength 10-year-old have garnered numerous awards and amassed a large following.

Get your bottle of this cask-strength Islay single malt today!

The nose opens with cereal, oak, honey, and plenty of peat. You'll find hints of tobacco, vanilla, and spice, along with medicinal notes. The palate is sweet and spicy with burnt oak, toffee, caramel, vanilla, brine, as well as hints of cream and spice. The finish is spicy with oak, brine, and lingering smoke.