Size750mL Proof86 (43% ABV)
Bowmore 15 Year Old is a rich and complex single malt Scotch whisky from the Isle of Islay’s oldest licensed distillery. After initially maturing in bourbon barrels, this award-winning expression is finished in Oloroso casks for three years, giving it the rich, deep color and robust warming finish.
Notify me when this product is back in stock. 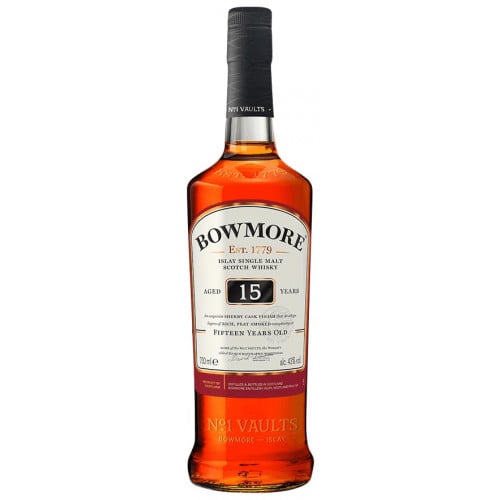 Bowmore is the first licensed distillery on the Isle of Islay and second in Scotland, which was first mentioned in records in 1779. Bowmore is a pioneering distillery, where the traditions, skills and expertise have been handed down since the earliest days of Scotch whisky. To this day, the distillery, standing on the shores of Lochindaal, still operates in traditional ways. Its handcrafted whiskies stand out for their complex balance of mild Islay smokiness, maritime minerality, with an abundance of fresh stone fruit notes. The distillery is owned by Morrison Bowmore Distillers Ltd., which is owned by the Japanese distiller Suntory through its subsidiary Beam Suntory.

Bowmore takes pride in investing more time than necessary at every stage of its process. It is one of the few distilleries to still be using its own Malt Barn, where locally sourced barley is malted using soft fresh water from the nearby River Laggan to break the starch down into fermentable sugars. The barley is then dried in the kiln, where peat is added to the furnaces for the first 18 hours, giving the single malt the subtle smokiness, characteristic of the Isle of Islay whiskies. Dried barley is then milled into grist, which is added to hot water in the mash tun to create wort. Once the wort is sieved, it is put into Oregon Pine Washbacks and yeast is added to start fermentation and make wash. The wash is first fermented in a copper wash still, creating low wine, which has an ABV of around 22%. This liquid is then distilled in the smaller spirit still, where only the heart of the run is collected with an ABV of 69%, and put in carefully selected casks to slowly mature in the distillery’s No.1 Vaults. While legally, new make spirit only becomes whisky after it has been matured for three years, Bowmore matures its whiskies for a minimum of nine years, allowing them to develop the distinctive complexity. Since single malt Scotch whisky is too delicate to mature in new oak casks, the distillery uses a variety of used casks, carefully sourced from across the world.

Dark chocolate and raisin aromas compliment the classic Bowmore smokiness on the nose.