Size750mL Proof92 (46% ABV)
This impressive single malt uses water sourced from the same stream that the original Wolfburn Distillery used two centuries ago.
Notify me when this product is back in stock. 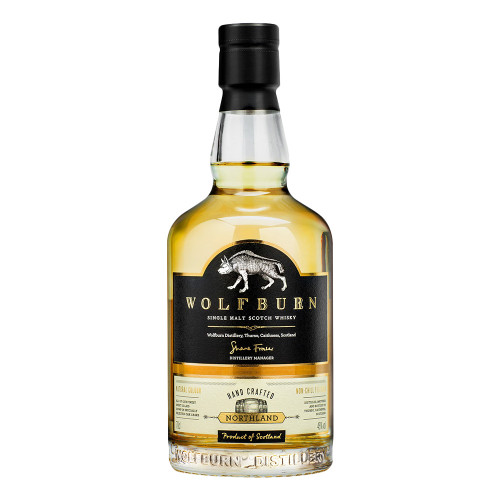 After 150 years of neglect, a group of private investors stumbled upon the old Wolfburn Distillery in May, 2011 — seeing massive potential, the investor began to rebuild the distillery from the ground up. The new Wolfburn Distillery, which, by law, must use water sourced from the same steam used centuries ago, is crafting unpeated malt whisky from a blank canvas through old-fashioned pot-still distillation; no automation, no rush and a lot of care.

Aged in quarter casks of American oak, Wolfburn Northburn Single Malt Scotch Whisky has a light, inviting aroma of pear, vanilla, clove and smoked wood. The palate begins with floral hints of cherry blossom, and continues to surprise with notes of mint, lemon and cracked pepper. The finish is long, oily and slightly smoky.

According to Dave Broom at Scotch Whisky Magazine, “I’ve been impressed with Wolfburn’s quality from the word go and this doesn’t disappoint.”

Pick up an impressive whisky today!

Light, inviting aroma of pear, vanilla, clove and smoked wood. The palate begins with floral hints of cherry blossom, and continues to surprise with notes of mint, lemon and cracked pepper. The finish is long, oily and slightly smoky.