Size750mL Proof99 (49.5% ABV)
The nose is sweet and fruity with corn, ripe cherry, raspberry, and plum aromas. You'll find notes of caramel, vanilla, clove, and dark fruit on the fresh and complex palate. The finish is smooth with lingering tannic red wine notes. 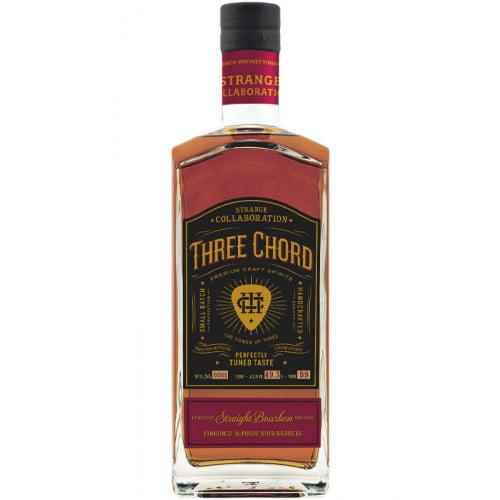 What makes Three Chord Strange Collaboration "strange"? Three Chord partnered with Strange Family Vineyards from Santa Rita, California, who contributed red wine casks for the whiskey to be finished in. It's a blend of light-bodied Kentucky straight bourbon aged between 2 and 6 years that was finished for 3 months in French oak Pinot Noir casks, resulting in a high-proof spirit that is light and fragrant with hints of delicious red wine aromas.

Get your bottle of this high-proof wine-finished bourbon today!

The nose is sweet and fruity with corn, ripe cherry, raspberry, and plum aromas. You'll find notes of caramel, vanilla, clove, and dark fruit on the fresh and complex palate. The finish is smooth with lingering tannic red wine notes.