Learn more
Size750mL Proof80 (40% ABV) *Please note that the ABV of this bottle may vary
This well-balanced single malt is matured for 15 years in a combination of American and European oak casks.
Notify me when this product is back in stock. 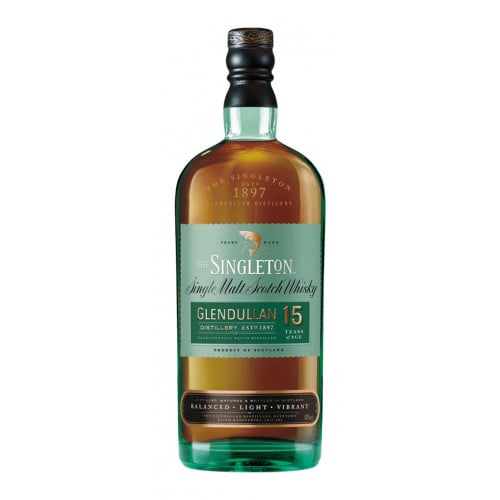 The Singleton brand is actually manufactured in three Scottish whisky distilleries; one of which is Glendullan. This 15 Year expression, along with the other expressions from the singleton lineup (a 12 and a 18 year), was released in the US in 2017.

This 15-year-old single malt whisky spends most of its time in American oak casks as well as a small portion of European oak casks to create a more harmonized spirit. The result is a balanced single with delicious citrus aromas, smooth fruity palate and a well balanced slightly spicy finish.

Sweet, soft and inviting on the nose. Mild at first with traces of spice and sweet wood followed by richer mature notes. The palate is soft and lightly sweet with buttery fruit cake mix followed by hints of citrus soft fruit and vanilla with a dry end. The finish is smooth, with light toasty oak, well balanced, with a creamy violet scented notes.