Size750mL Proof80 (40% ABV)
Bottled at 40% ABV this single malt won a Gold Medal in the Speyside Single Malts 13-18yo category at the 2015 Scotch Whisky Masters.
Notify me when this product is back in stock. 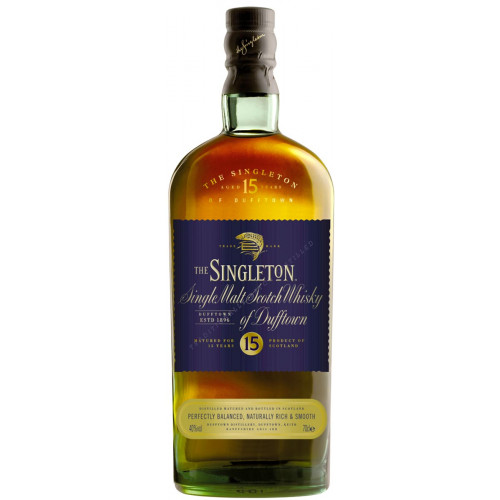 Situated in the Speyside region of Scotland, the Dufftown Distillery was founded in 1895 by four wine merchants who, together, purchased a stone built saw and meal mill and converted into a distillery. Located near the confluence of the Rivers Dullan and Fiddich, the distillery draws its water from Jock's Well, which is renowned for its incredibly pure and flavorful spring water (on more than one occasion, nearby distilleries — particularly Mortlach — have been caught attempting to divert water from the well to their own distillery).

Singleton of Dufftown Single Malt Scotch Whisky is crafted exclusively from malted barley, which is milled and mashed before being fermented in the distillery's wooden washbacks. Following fermentation, the whisky is distilled twice: first through a copper pot wash still and then again through a copper pot spirit still.

The Singleton brand is actually manufactured in three Scottish whisky distilleries one of which is Dufftown. This classic 15-year-old Speyside Dufftown malt was originally released for the travel market. Aged in a custom mix of European and American oak casks, it’s rich, sweet and spicy notes make a compelling argument for younger single malt expressions on the market.

The intersection of delicate and rich, this Single malt is “reassuringly well-balanced for a 15-year-old, this is an elegant malt with sweet fruitiness and perfect finish.” This single malt is a perfect sipping whisky for its age, the honeycomb, sweet chestnut and sharp red berry fruit flavors of The Singleton of Dufftown 15-Year-Old yield an enticing experience on the palate. Bottled at 40% ABV this single malt won a Gold Medal in the Speyside Single Malts 13-18yo category at the 2015 Scotch Whisky Masters (The Spirits Business).

Dry with a light spice on the nose, notes of toffee apples, hints of honeycomb, balanced by remnants zesty linseed oil and scented tea. This initial nose is followed by ripe autumn fruits red berries, malty aromas, sweet syrupy notes, and a hint of toasted oak when opened up with a dash of water. The palate is well-balanced, dry, sweet, fruity and complex, with sweet flavors, warm light and smoot, malty oaty notes, fresh fruit salad, spice, floral notes. The finish is drying with pears and digestive biscuits, delicately spiced with notes of aniseed.