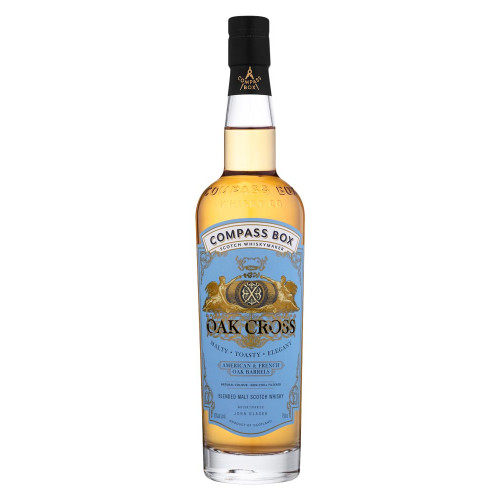 Glaser pushed the boundaries of innovation to new levels with his art of “whiskymaking,” by producing his innovative French New Oak casks heads, made by a small mill in France that produces high quality cooperatione oak. Through sheer alchemy, this experimental secondary maturation of malt whiskies give Compass Box blends a complexity of character different than most Scottish Whiskies. 40% of the whisky in Oak cross is finished with this technique.

Oak Cross is part of the Signature Range of Compass Box with clove and fruity characteristics. This Highland blend contains 60% malt whisky from the villages of Brora, giving the blend its fruity character. It is also 20% malt whisky from the village of Carron which contributes to the blend’s meaty quality, and 20% malt whisky from Alness, providing the expression with perfumed fragrant notes. For the primary maturation stage, all of the whiskies are aged in a variety of American oak casks. The 60% of this blend that is not re-casked in the hybrid barrels is matured for an extra 6 months in first fill American standard oak barrels.

The marrying casks are a mix of first fill Bourbon Barrels and their proprietary “Oak Cross” casks made of American and new French oaks.

On the nose are aromas of Light, stewed fruit, ginger, spice, toffee apple, stewed fruits. On the palate, notes of clove and vanilla accent a sweet maltiness and subtle fruit character. The finish has notes of oak, malt, spicy sweetness, milk.