Size750mL Proof80 (40% ABV)
Coming from a two-century-old distillery, the Royal Brackla has a rich history that includes the first whisky to have been granted an official royal seal. This expression has been aged for 12 years in Oloroso sherry casks.
Notify me when this product is back in stock. 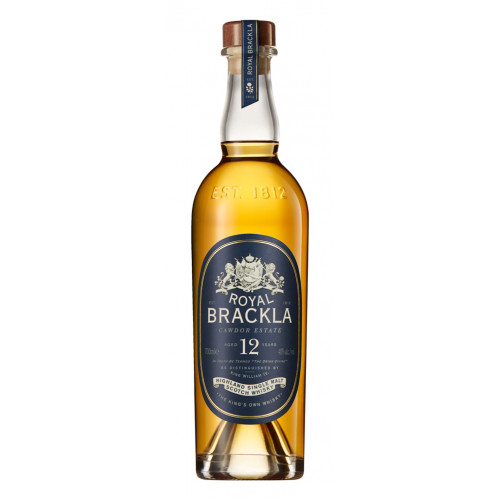 The Speyside Royal Brackla Distillery opened in 1812 by Captain William Fraser. Employing the family barley farm, the distillery had their big breakthrough in 1935. They produced the first single malt with a royal warrant, granted by King William IV, earning the nickname "The King's Own Whisky." The operation changed hands many times in the following two centuries before it was bought by Bacardi in 1998. "This is the one that was described as "The Drink Divine" by the Royal household in the 1830s. [...] "There’s only one whisky in the world that can be the first Royal whisky, I feel privileged to have worked on this," says Stephen Marshall of Bacardi.

Today the facility uses the finest barley and crystal clear water from the Cawdor Burn. More time is allowed for the fermentation and the slow distillation process leads to more contact of the spirit with the copper. This minimizes the sulphur notes and brings a fruity, slightly grassy character to the spirit. The liquid is then aged in first-fill Oloroso sherry casks that bring notes of muscovado, dates, and walnuts to the table.

The sherry casks are obvious throughout the profile. There are cookies, ginger, apple, raisins, as well as almonds on the nose. They are joined on the malty palate by vanilla, orange zest, as well as peppery notes. The finish is long and spicy with prominent pepper, some apple sweetness, and a hint of chocolate.