Size750mL Proof92 (46% ABV)
This outstanding whisky, aged for one-and-a-half decades, is a rare distillery bottling from one of the more obscure — and similarly revered — Scottish distilleries. 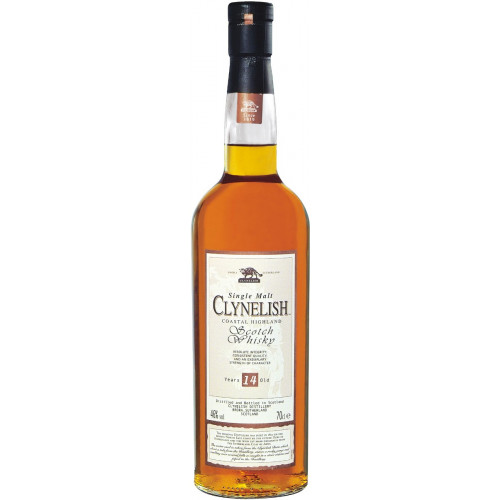 Following distillation, Clynelish 14 Year Old Single Malt Scotch Whisky is matured for 14 years in oak casks before being bottled at 92 proof. While the vast majority of whisky produced at Clynelish Distillery is used as the basis for Johnnie Walker (as well as a few other Diageo) blends, this distillery bottling allows the true depth and character of Clynelish to shine on its own.

Clynelish 14 Year Old Single Malt Scotch Whisky has an aroma of plums, grapes, plump barley and a hint of citrus. The aroma gives way to a rich, waxy body, with floral and peat notes layered underneath saltwater taffy, and leads to a subtle finish accented by figs, black pepper and caramel.

While Clynelish remains one of the more obscure distilleries in Scotland, the quality of whisky it produces and its steadfast commitment to Scottish tradition are sure to put it on the map. Clynelish 14 Year Old Single Malt Scotch Whisky earned a 94 point rating at the Ultimate Beverage Challenge.

Aroma of plums, grapes, plump barley and a hint of citrus. Aroma gives way to a rich, waxy body, with floral and peat notes layered underneath saltwater taffy, and leads to a subtle finish accented by figs, black pepper and caramel.