Size750mL Proof86 (43% ABV)
Aged for a minimum of 14 years, this whisky is finished in casks that were previously used to mature Caribbean rum.
Notify me when this product is back in stock. 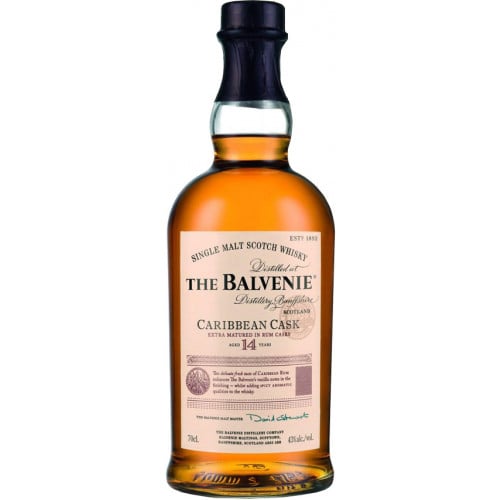 Born into poverty in December 1839, William Grant became a cattle herder at the age of 7 in order to supplement his family's income. As a teenager, Grant apprenticed as a cobbler and a clerk, and in 1866, he joined Mortlach Distillery as a bookkeeper. For the next two decades, Grant managed the affairs at the distillery, while secretly learning the art of distillation. In 1886, he resigned from his position as distillery manager and bought a field beneath the towering shadows of Balvenie Castle, which he eventually converted into The Balvenie Distillery. Today, The Balvenie Distillery, situated in the Speyside region of Scotland, remains one of the most prestigious independent distilleries in all of Scotland.

The Balvenie Single Malt Whisky is made from fresh, plump barley grown on Balvenie Mains, a 1,000 acre farm situated adjacent to the distillery (the farm has been the distillery's source for barley for over a century). After the barley is harvested, it is malted at the distillery with spring water sourced from the rolling Speyside hills that overlook the distillery. During the malting process, the barley is turned up to four times a day in order to ensure that it germinates evenly (The Balvenie is the only single malt Scotch whisky distillery that continues to grow and malt its own barley).

Once the barley has been malted, it is milled and mashed at the distillery before being fermented using a proprietary strain of yeast. Following fermentation, the wash is distilled twice, first through Balvenie's copper-pot wash still and then again through its copper-pot spirit still. "The most important reason for using a copper still," explains Dennis McBain, Balvenie's coppersmith, "is that it acts as a catalyst. It removes any sulphur which may be carried over from the fermentation process prior to distillation."McBain, who joined Balvenie Distillery in 1959, is one of the oldest coppersmiths remaining in the industry.

In addition, the size and shape of Balvenie's stills — the stills' necks have unique boil balls that are nicknamed "Balvenie Bowls"- results in Balvenie's signature bold and malty flavor profile. "The size and shape of the boil ball allow for the vapors to mix before continuing up the head," explains McBain. "That helps make The Balvenie special."

The Balvenie 14 Year Old Caribbean Cask Single Malt Scotch Whisky is aged in traditional oak casks for a minimum of fourteen years. Following its initial beautyrest, the Scotch whisky is double-barreled, or finished, in casks that were previously used to mature a Caribbean rum. While Scotch whiskies are traditionally finished in port or sherry casks, only a select handful of whiskies are finished in rum casks, as they impart more tropical flavors to whisky as compared to wine casks, and contribute to a more unique flavor profile.

The Balvenie Caribbean Cask Single Malt Scotch Whisky has an aroma of sweet vanilla and toffee, along with a touch of candied fruits. The aroma gives way to notes of dried fruits (particularly pears), molasses and honeyed oak on the palate, which are well-complemented by hints of mellow caramel and butterscotch. The finish is soft and elegant, and ends with with a lingering flavor.

Aroma of sweet vanilla and toffee, along with a touch of candied fruits. Notes of dried fruits (particularly pears), molasses and honeyed oak on the palate, which are well-complemented by hints of mellow caramel and butterscotch. Finish is soft and elegant, and ends with with a lingering flavor.