Size400mL Proof92 (46% ABV)
Discover the two main types of cask maturation for Single Malts with this gift pack of two Kilchoman core expressions, Machir Bay and Sanaig.
Notify me when this product is back in stock. 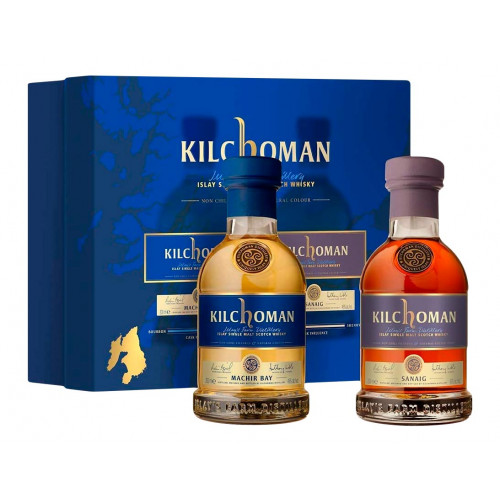 Producing Scotland’s only Single Farm Single Malt, Kilchoman Distillery is situated along a rugged farm on the western coast of Islay. A family run business, it was founded in 2005 by Anthony and Kathy Wills. This barley to bottle distillery is the first new distillery on Islay in over 125 years. "When we first started work on Kilchoman in 2003," says Anthony Wills, the distillery's founder, "the ambition was to build a distillery that was true to the traditions of distilling on Islay — small farm distillers where every part of the whisky-making process was done on site and I think we have managed to do just that." Their 2,000 acres farm, where they grow their own barley, is a place of a wide range of biodiversity, hosting everything from corncrakes and eagles to wildflowers and native woodland.

With their Gift Pack, you can explore Kilcho man core range and get a taste of their two main expressions. Containing 20cl bottle of Machir Bay and Sanaig, the Gift Pack will help you discover the two main types of cask maturation, used to produce their Single Malts: ex-oloroso sherry and ex-bourbon from Buffalo Trace.

With the ex-bourbon influence prevailing, Machir Bay is a complex combination of ex-bourbon and oloroso sherry butts. Named after the most, this single malt is adored for its "beautiful balance of vanilla, smokey butterscotch and rich fruitiness each contributing in complexity and combining to create a truly unique Islay dram" says Robin Bignal, Kilochman Production Manager.

Named after an inlet on Islay's rugged Atlantic coast, Sanaig is also matured in sherry and bourbon barrels, but the oloroso influence is much more predominant compared to Machir Bay. Here, you’ll admire the balance between "the contrasting influences of rich sherry maturation, bourbon barrel finesse and Islay peat smoke."

Pick up your Gift Pack and discover two main types of cask maturation for Single Malts!

Machir Bay greets with notes of honey, peat, vanilla and rich fruits on the nose. On the palate, it's balanced and complex with orchard fruit, vanilla and smoky butterscotch. The finish is a long fade of peat, fruit and honey.

Sanaig has malty and fruity notes of raisins on the nose, while the palate is char, dark fruit, some Islay peat and smoke. The finish is long.