$234.99
Caskers Rewards members earn up to 11 store points back when buying this bottle.

This product is available in: DC, MI, TX Unfortunately, we can't ship to PO Boxes and APO addresses.

Size750mL Proof97.2 (48.6% ABV)
Aged in American and European sherry-seasoned casks, this is the 6th and final release in The Macallan's Edition series. Each of the 6 single malts explored a part of the whisky-making process, this one taking its inspiration from the River Spey.
Notify me when this product is back in stock.

This product is available in: DC, MI, TX Unfortunately, we can't ship to PO Boxes and APO addresses. 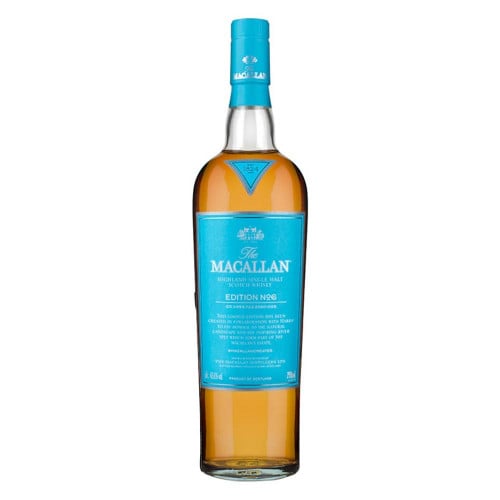 About The Macallan Edition No. 6 Single Malt Scotch Whisky

Edition No. 6 had whisky maker Steven Bremner hand-pick 5 casks that make up its profile with its beautiful dark walnut color, complex aroma, and deep flavor. Bringing together the mastery of The Macallan and the craftsmanship Lalique, this piece of timeless elegance is the 6th and final entry in the Edition series which began in 2015 and explores the "unique and defining elements which make The Macallan one of the world’s most revered single malts." The rich and sophisticated spirit is aged in American and European sherry-seasoned casks.

The antique brass whisky has aromas of fresh fruits, nutmeg, ginger, chocolate, toffee, vanilla, and oak. Plum and orange are on the palate along with oak, cinnamon, nutmeg, toffee, and oats. The finish has lingering fruit, chocolate, and toasted oats notes.