Size750mL Proof86 (43% ABV)
The range-topping 18-year-old is the crown jewel of The Macallan's Double Cask series. Aged in sherry-seasoned American oak and European oak before being blended, it showcases the skill of The Macallan's wood masters at its finest. 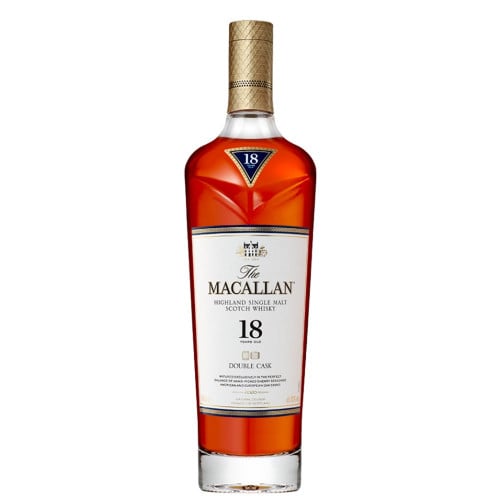 The Double Cask range combines the sweetness of American oak with sherry-seasoned American and European oak casks. These are hand-picked by the wood masters at The Macallan. The new American oak is first brought to Spain to be assembled and sherry-seasoned before the barrels travel to Speyside for the maturation. The whiskies are then combined with European oloroso sherry casks. Showcasing the distinctive mastery and rich flavor complexity of The Macallan, The Macallan Double Cask 18 Year Old is matured in the world's most extraordinary casks. Expect an exquisite balance of notes of dried fruit, toffee, and ginger from European oak, balanced by the delicate vanilla and sweet citrus flavors, imparted by American oak. A rich and multi-dimensional taste experience.

The amber-honey-colored whisky opens with dried fruit, ginger, toffee, as well as orange, clove, and nutmeg aromas. Raisins and sultanas are on the palate along with caramel, ginger, and vanilla that are balanced beautifully by wood spice and citrus zest. Finishes with oak, spice, ginger, and orange.