Size750mL Proof122.4 (61.2% ABV)
This bottle of 14-year-old single malt comes from a single sherry butt that was emptied in 2018. The cask yielded a total of 528 bottles of the cask-strength 122.4-proof non-chill-filtered whisky.
Notify me when this product is back in stock. 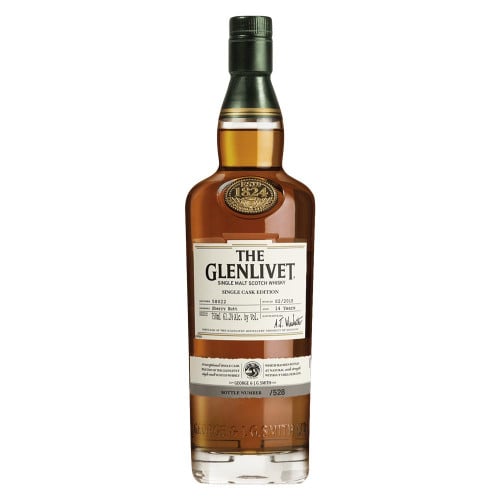 After the barley has been fermented, it is distilled twice — first through Glenlivet's wash still, and then again through Glenlivet's spirits still. Originally designed by George Smith, the copper-pot stills have a unique, lantern-like shape, which encourages contact between the whisky and the copper (the copper strips the whisky of any impurities it may have, and provides for a lighter and more pure flavor profile). In addition, the height of the stills ensures only the lightest vapors are condensed, making for a more delicate and elegant whisky.

The Glenlivet's Single Cask releases are some of their most unique, rare, and desirable bottlings. This particular bottle was bottled in February 2018. It's a cask-strength, non-chill-filtered Speyside whisky that has spent 14 years in the sherry butt that ended up yielding 528 bottles of 122.4-proof whisky. Each cask is a unique and exclusive single malt experience.

Grab one of these 528 bottles of this sherried whisky today!

It's a fruity and well-balanced whisky with sweet aromas of fruit, citrus zest, and a touch of spice. The palate has dried fruit, nuts, coffee cake, cherry jam, and hints of cinnamon.