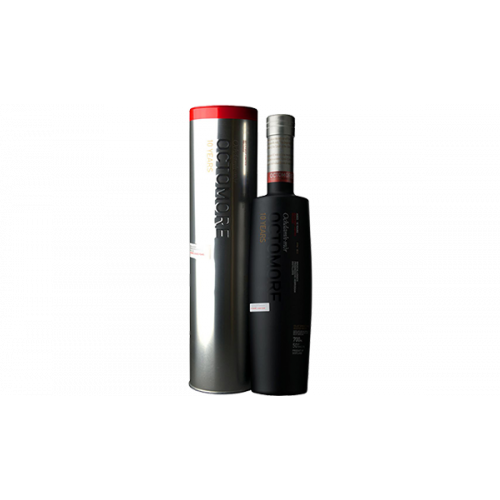 Inspired by an entrepreneurial flair and a youthful enthusiasm, the Harvey brothers began construction of the Bruichladdich (pronounced brook-laddie or broo-lah-dee) Distillery in 1881. The brothers were descendants of a dynastic whisky family — their ancestors had already owned distilleries in Scotland for over a century. Today, Bruichladdich Distillery (Bruichladdich means "rocky shore"in ancient Gaelic) remains situated on the shores of Loch Indaal on the island of Islay, and continues to use much of the original equipment installed by the Harvey brothers.

Bruichladdich Octomore 6.1 is the sixth release in Bruichladdich's Octomore series. The whisky takes its name from Octomore Farm, a farm situated high above the village of Port Charlotte just two miles away from Bruichladdich Distillery (the farm provides all of the barley used to create Bruichladdich Octomore). Once barley from Octomore Farm has been harvested, it is malted before being peated to 167 phenol parts per million, making it one of the peatiest whiskies in the world. In contrast, other distilleries on Islay such as Laphroaig and Ardbeg peat barley to approximately 40 or 50 phenol ppm, while Leviathan II Whiskey is peated to 110 phenol ppm.

After the barley has been peated, it is mashed using water drawn from the Bruichladdich loch. The water is soft and devoid of minerality, which makes it ideal for mashing and fermenting the barley. Following fermentation, the wash is twice distilled through Bruichladdich's 130 year-old, 20-foot tall, diamond-shaped stills. The Victorian-era stills produce whisky that is notably floral and elegant. "We have a distillery," says Jim McEwan, the master distiller at Bruichladdich, "and we know how to use it."

Once the whisky has been distilled, it is matured for five years in American oak casks that were previously used to mature bourbon. The whisky has a strong, deep aroma of fire and warm, smoky sweetness. The initial flavors of apples, pears, cinnamon and citrus are complemented by a bold and ever-present undertone of smoke. Thick and textured, the whisky finishes with a warm, smoky flavor that lingers.

"This is no monstrous brute," says McEwan. "It's an iron fist in the velvet glove. That's what you get when you combine massively smokey barley with the purest spirit around. It's like nothing else on earth. It also shows what great quality barley, slow, artisan distilling, and premium quality wood can achieve."

Following distillation, Bruichladdich Octomore 10 is aged for ten years. As a result of using less peat and maturing the whisky longer, Octomore 10 has a stronger aroma of dried fruits, particularly pears and raisins, than Octomore 6.1. In addition, the whisky has subtle undertones of juniper, cinnamon, honey, creamy vanilla and fresh mint that ultimately lead to a lingering finish. "The decade wait has been worth while," says McEwan. "There is pride in the character and honesty of this Islay son."

Bruichladdich Octomore 6.1 was just released, and only 6,000 bottles of Octomore 10 were ever produced. Pick one of each up today!

6.1: Strong, deep aroma of fire and warm, smoky sweetness. Initial flavors of apples, pears, citrus and cinnamon are complemented by bold notes of smoke. Thick and textured, the whisky finishes with a warm, smoky flavor that lingers.