Learn more
Size750mL Proof96.8 (48.4% ABV) *Please note that the ABV of this bottle may vary
The Macallan Edition No.4 is the embodiment of The Macallan’s renovated Speyside distillery, capturing the essence of its beautiful craftsmanship in every drop. 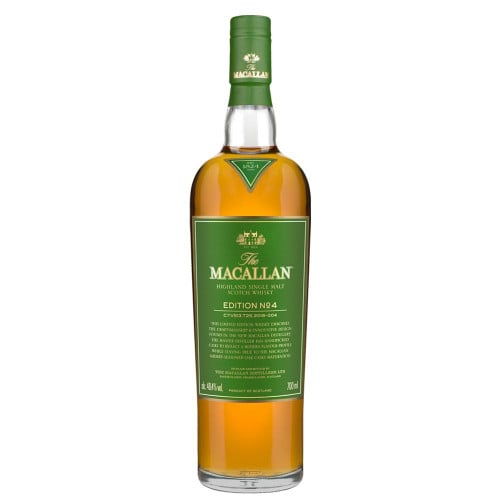 About The Macallan Edition No. 4 Single Malt Scotch Whisky

After the barley is harvested in late August and early September, it is malted before being mashed in one of The Macallan's two mash tuns, a process that takes between four and eight hours. Then, the barley is fermented with a specially cultured yeast before being distilled twice through The Macallan's copper-pot stills. The copper comprising the stills acts as a catalyst and enhances the formation of sweet esters while minimizing impurities such as sulphur. In addition, the curiously small stills — some of "the smallest stills within the Scotch whisky industry," according to production manager Alexander Tweedie — produce a whisky with a dense, oily flavor.

Unlike its predecessors Edition No. 1 and Edition No. 2, which capture the essence of the relationship between cask and spirit, and Edition No. 3 which highlights the aromas, Edition No. 4 unveils the structure of the whisky, drawing parallels on how the new Macallan Distillery is constructed and showcases the lengths The Macallan goes to when creating single malts. Crafted from a combination of European and American oak casks, The Edition No. 4 is vibrant and bold on the nose with well-rounded notes of honey, toffee, crisp apples, while on the palate lay rounded honey, sweet toffee and citrus fruits. The bottle also includes a hand-signed print of The Macallan Distillery by Magnum photographer Paolo Pellegrin.

Bold on the nose with well-rounded notes of honey, toffee, crisp apples, citrus zest, and nutmeg. Oak comes in at the end of the nose, contrasting the wood and floral undertones. On the palate, you’ll also get rounded honey, sweet toffe, and citrus with a sweet vanilla finish.