Learn more
Size750mL Proof92 (46% ABV) *Please note that the ABV of this bottle may vary
Aged for nearly two decades, this heavily peated, brazen since malt is strikingly complex.
Notify me when this product is back in stock. 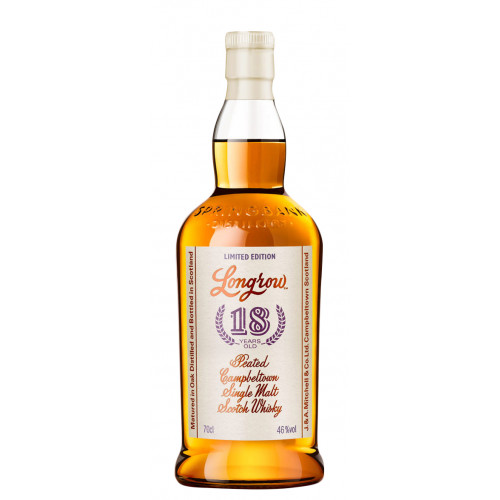 Produced by Springbank Distillery, this Longrow 18 is dark and slightly mysterious, with a complex nose that unearths a peaty aroma reminiscent of dunnage warehouses. This heavily peated, brazen since malt is bottled at 45% ABV.

A complex nose: Sweet fruits, citrus, peaches and orange zest at first before a gentle earthy peaty aroma reveals itself. The palate is rich and very, well balanced. Dark chocolate, creamy coffee and gingerbread to the fore, followed by rhubarb and vanilla custard. The finish is long and sweet, a hint of typical Longrow peat smoke combined with more chocolate and some dried fruits.