Size750mL Proof107.8 (53.9% ABV)
ICE Edition is the first release in the cult two-part series inspired by the legends of the Frost and Fire Giants and their battles against the Norse Gods to rule the world. This incredible whisky earned the Chairman's Trophy for Best Island Single Malt of 2016, with an incredible score of 99/100.

Matured entirely in ex-bourbon casks for 17 years, a rarity for Highland Park, this award-winning single malt is beautifully balanced with aromas and notes of baked pineapple, honeyed graham cracker, grated ginger, campfire smoke, baking spice, and tropical fruits.
Notify me when this product is back in stock. 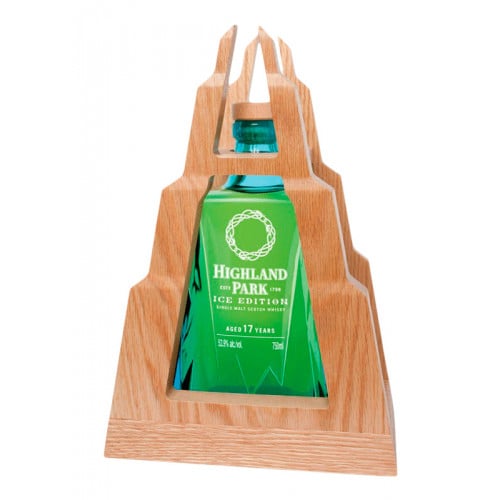 Situated just a few miles north of Scotland's mainland, the Orkney archipelago was occupied by a number of different nomadic and belligerent tribes for centuries. In 875, however, the islands were annexed by Norway and settled by the Norse, who began using the archipelago as a base for Viking raids across Europe. In 1468, the islands were pledged by King Christian I of Norway as a dowry to James III of Scotland, and since then, the islands connection with Scotland has been perpetual. Highland Park Distillery is situated in Kirkwall — the capital of the Orkney islands — and was founded in 1798 by Magnus Eunson. The name of the distillery is derived not from the region of Scotland known as The Highlands (the Orkney islands are not a part of The Highlands) but rather from the region known as High Park, where the distillery was founded.

Highland Park Odin is the final of four releases in the Valhalla Collection available from Highland Park Distillery. Odin pays homage to the eponymous Norse god, the dominant Allfather and King of Asgard known for his furious and intensely complex character. According to the distillery, “Odin is the strongest of all the Norse gods and driven by an unquenchable thirst for wisdom. By sacrificing an eye for a drink from the Well of Wisdom, he earned immeasurable knowledge and insight. With only one eye which blazes like the sun, Odin cuts an ominous figure.”

Highland Park Ice Edition 17 Year Old Single Malt Whisky is made from lightly peated barley, which is mashed and fermented before being twice distilled through Highland Park's copper-pot stills. Following distillation, the whisky is matured for 17 years in American oak ex-bourbon casks, a rarity for the distillery. The whisky itself is straw gold in color with an aroma of baked pineapple, honeyed graham cracker, grated ginger, and campfire smoke. Notes of baking spice and tropical fruits appear on the palate over a layer of smoke, and lead to an earthy finish.

Celebrated with the Chairman's Trophy and a score of 99/100 upon its release, only 17,000 of these bottles will ever be released globally.

The whisky itself is straw gold in color with an aroma of baked pineapple, honeyed graham cracker, grated ginger, and campfire smoke. Notes of baking spice and tropical fruits appear on the palate over a layer of smoke, and lead to an earthy finish.