Learn more
Size750mL Proof92 (46% ABV)
From the experimental folk at Ardbeg, comes this intensely mellow dram – Ardbeg Grooves.
Notify me when this product is back in stock. 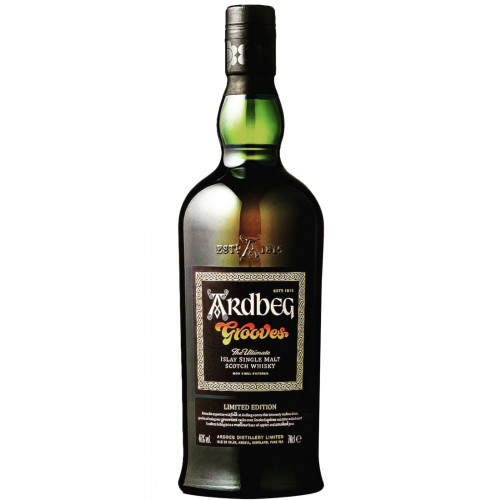 The southernmost of the Inner Hebridean Scottish Isles, the island of Islay (pronounced EYE-lah) is only 240 square miles and home to just over 3,000 inhabitants. Still, the island is one of just five distilling regions in Scotland whose identity is protected by law. Ardbeg Distillery, which is situated on the southern coast of Islay, was founded in 1815 by the MacDougall family. By 1886, nearly one-third of the population of Islay worked at the distillery and today, it stands as a testament to Scottish heritage and tradition.

From the highly innovative folks at Ardbeg, comes an inspired, nuanced, mellow expression. Ardbeg Grooves harkens back to “an Islay time gone by – back to village of Peat & Love” (producer). This groovy limited edition Islay has aromas of smoked spices combine with distant bonfires fading into a mellow haze of apple and smoked pear. It’s just good vibes…and good whisky, man.

Smoked cinnamon and paprika on the nose, antique leather and saddle soap, classic Ardbeg pine, tar and briny sea spray in the background, a distant subtle bonfire with savory notes. The palate is briny with sweet vibes of treacle toffee, vanilla popcorn, peaches, smoky BBQ, paprika and mustard spice, fading into a haze of smoked pears and apple cider. The finish has smoked paprika and bonfires with a mellow sweetness throughout.