Learn more
Size750mL Proof104.8 (52.4% ABV) *Please note that the ABV of this bottle may vary
The Balvenie Tun 1509 Batch #7 is a single malt scotch whisky, made using whisky from 21 hand-picked casks, including ten sherry butts, seven sherry hogsheads and four American oak barrels. Following its marrying period, this deep edition of the distillery’s popular series was bottled up at 52.4% ABV.
Notify me when this product is back in stock.

This product is available in: DC, NH, NY, WA Unfortunately, we can't ship to PO Boxes and APO addresses. 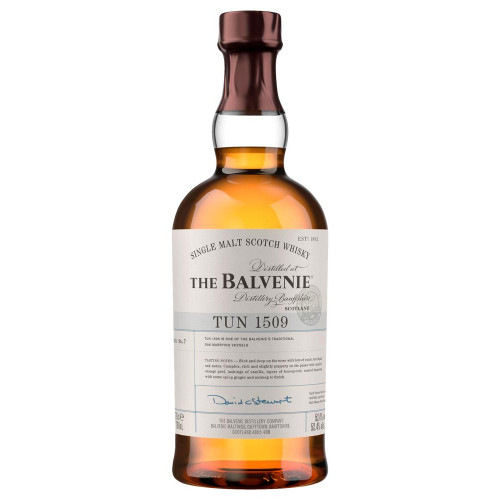 The Balvenie is a Speyside single malt Scotch whisky distillery in Dufftown, Scotland, owned by William Grant & Sons. Balvenie started producing whisky in May 1893, fifteen months after William Grant started converting an 18th-century mansion, the Balvenie New House, into a distillery. Grant, who got his first job as a cattle herder at the age of seven, worked his way up from a bookkeeper to manager at the Mortlach distillery, where he stayed for twenty years, learning the distilling trade. Grant remained with the Balvenie company until his death in 1923 at the age of 83. In the same year, his son, John, began the first expansion of the distillery. In 1929, the original maltings were replaced with the traditional malting floor still used today. The Balvenie is the only distillery in Scotland that still grows its own barley, uses traditional floor maltings and keeps both a coppersmith and a team of coopers on site.

David C. Stewart began working with William Grant & Sons in 1962, at the age of 17, and twelve years later he became the fourth Malt Master of The Balvenie in the distillery’s history. In the 1980s, Stewart first experimented with maturing The Balvenie in two different wood types in succession, creating the process that would later be called finishing. In 2010, the distillery launched Tun 1401, the first of the Tun range in which Stewart selects some of his favorite rare casks from the oldest warehouses. Nine batches later, in 2014, the series was replaced by Tun 1509. Stewart received his MBE from Queen Elizabeth II in 2016 for his services to the Scotch Whisky Industry.

The Balvenie Tun 1509 Batch #7 is a single malt scotch whisky, which was made using whisky drawn from 21 hand-picked casks, including ten sherry butts, seven sherry hogsheads and four American oak barrels. Following its three-month marrying period in the tun, this edition was bottled up at 52.4% ABV.

The nose is rich and deep, with lots of exotic and elegant oak notes. The rich and lush palate is slightly tangy with candied orange peel, lots of oak vanilla, some golden syrup, layers of honeycomb, and toasted hazelnuts. The finish is sweet and malty with oak vanilla and spices.