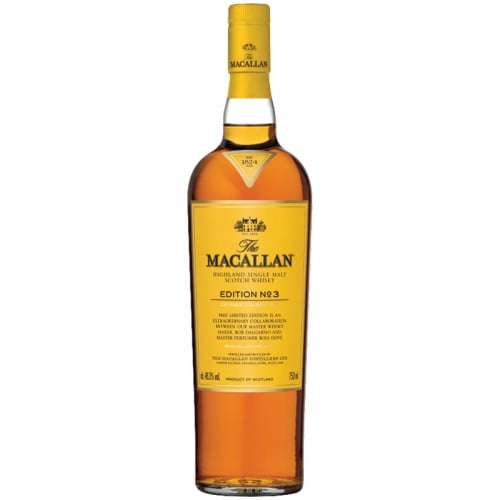 About The Macallan Edition No. 3 Single Malt Scotch Whisky

After the barley is harvested in late August and early September, it is malted before being mashed in one of The Macallan's two mash tuns, a process that takes between four and eight hours. Then, the barley is fermented with a specially cultured yeast before being distilled twice through The Macallan's copper-pot stills. The copper comprising the stills acts as a catalyst and enhances the formation of sweet esters while minimizing impurities such as sulphur. In addition, the curiously small stills — some of "the smallest stills within the Scotch whisky industry," according to production manager Alexander Tweedie — produce a whisky with a dense, oily flavor.

Born of two art forms, Edition No. 3 unites the worlds of whisky and aroma to showcase the power of the senses in creating and experiencing The Macallan. Realized in collaboration with Master Perfumer Roja Dove, Edition No. 3 is an intriguing combination of two types of oak casks - European and American. Together these casks create a distinctive single malt with a rich and fruity character that balances the classic flavors of The Macallan with citrus, vanilla, florals and fresh cut oak.

The nose harbors refined notes of sweet vanilla, oak, and delicate floral aromas. This is followed by citrus essential oils, baking spice and ginger, cocoa, and soft oak. The palate is not cloyingly sweet with flavors of fruit, vanilla and crisp orchard fruits, folowed by baking spices and powerful oak. The finish leaves a beautiful impression on the senses with a lingering, sweet, delicious fruit note.