Size750mL Proof98 (49% ABV)
Aged for over twelve years, this limited edition single malt scotch was made to commemorate Ardbeg Distillery's first adventure into space.
Notify me when this product is back in stock. 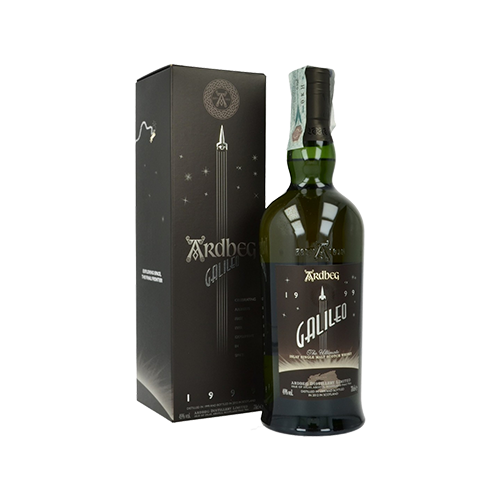 In the late autumn of 2011, a rocketship blasted off from Earth traveling at nearly 25,000 miles per hour. Within its cargo hold, the ship carried vials of Ardbeg-crafted molecular compounds, which are being used in a collaborative research experiment being conducted by Ardbeg Distillery and NanoRacks LLC, a Houston-based space research company. The goal of the experiment is to test the effects of a zero-gravity environment on terpenes, a set of chemical compounds that are widespread in nature, as they mature in charred oak casks. Together, a team of scientists from NanoRacks is working closely with Ardbeg distillers to monitor the terpenes as they mature on the International Space Station, and as control samples mature in Warehouse 3 at Ardbeg Distillery in Islay, Scotland.

Ardbeg Galileo Single Malt Scotch Whisky is a limited edition single malt whisky launched by Ardbeg Distillery in commemoration of their first adventure into space. The single malt is a vatting, or blend, of different styles of Ardbeg whisky that were distilled in 1999, and aged in casks that were previously used to mature marsala wine and bourbon. After maturing for just over twelve years, the casks were blended together in order to create Ardbeg Galileo.

Ardbeg Galileo has a slightly fruity aroma, with hints of cinnamon and vanilla. Subtle touches of lemons and dried fruits compliment bolder notes of peat smoke, and a rich, chewy texture. The finish is long and luxurious, and ends with a hint of espresso.

Go where no Ardbeg has gone before. Pick up a bottle of Ardbeg Galileo today!