Learn more
Size750mL Proof110 (55% ABV) *Please note that the ABV of this bottle may vary
For the fourth incarnation of The Macallan Classic Cut, their Whisky Mastery Team chose a combination of sherry-seasoned European oak casks and ex-bourbon American oak casks. Light sweetness, depth, and complexity, this is true The Macallan.
Notify me when this product is back in stock. 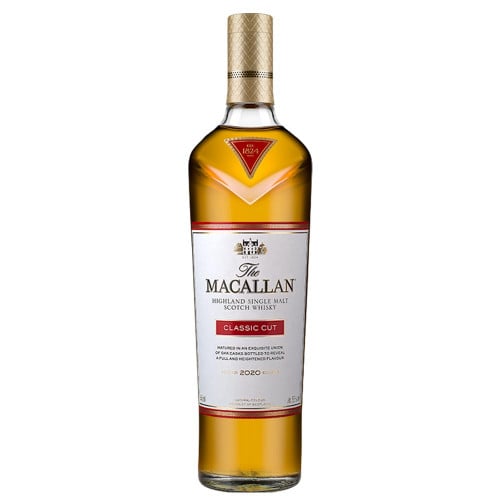 Now in its fourth incarnation, The Macallan Classic Cut 2020 Edition is bottled at a higher 110 proof in order to let the full flavor to shine. This time their Whisky Mastery Team, headed by Polly Logan, explores different cask types for the first time in the series. A combination of sherry-seasoned European oak casks and ex-bourbon American oak casks was used to craft its unique, rich and indulgent profile that has "a sweet lightness brought by the ex-bourbon oak casks, intertwined with the depth and complexity created by The Macallan’s signature sherry-seasoned oak casks." An exceptional showcase of the mastery and flavor complexity that distinguish The Macallan, this whisky is made for drinking as well as collecting.

The nose opens with vanilla, candied orange peel, honey, caramel, raisins, and some fresh oak and thyme. It's warm on the palate with gingerbread, orange zest, vanilla, honey, and oak. Finishes with a lingering sweetness and spicy note.