Size750mL Proof90 (45% ABV)
The first single grain Scotch from Orphan Barrell, this expression contains a rare 24-year-old spirit from the historic Port Dundas Distillery that closed its doors in 2010. 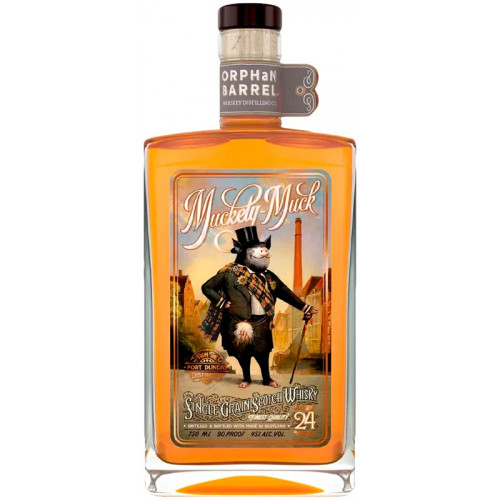 Orphan Barrel Muckety-Muck is a similar beast, except that it hails from across The Pond. Following in the footsteps of Forager’s Keep 26 Year Old Single Malt Scotch Whisky, it's their first single grain Scotch and an equally well-aged one at 24 years. The spirit comes from the famous Port Dundas Distillery that operated for 2 centuries, until its closing in 2010. This liquid comes from the rare remaining stocks that offer a glimpse into the historic distillery.

Caramel and burnt sugar lead the charge on the nose. The palate has fruity notes as well as plenty of lightly toasted oak. Butterscotch and vanilla make a late entry and last throughout the long finish.