Size750mL Proof80 (40%ABV)
This solid 12 Year is a part of The Macallan’s Sherry Oak range. Matured in seasoned oak casks sourced from Jerez.
Notify me when this product is back in stock. 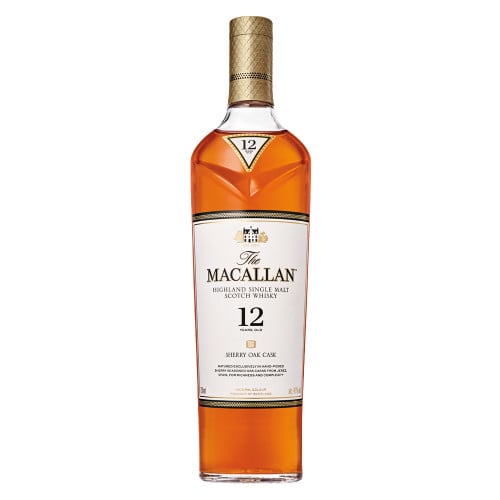 The Macallan has been known for its unsurpassed commitment to the mastery of wood and spirits since its establishment in the 1824. A showcase of this, the 12 Year Old Sherry Oak is a part of The Macallan’s Sherry Oak range, featuring a series of single malt whiskies matured exclusively in hand-picked sherry seasoned oak casks sourced from Jerez. A result of twelve years in Oloroso Sherry-seasoned oak casks, this rich and complex whisky delivers rich wood spice, opulent vanilla and dried fruits as well as a natural rich gold color.

Situated on a ridge above the banks of the River Spey, the Easter Elchies House has been the spiritual home of The Macallan for over three centuries. In 1820, Alexander Reid began renting the home from Sir Lewis Grant of Grant. Reid was a farmer, and soon after he sowed the fields surrounding the home with barley, Reid established the first licensed distillery on the estate, which he named Macallan after an ancient church that had been destroyed by fire during the 15th century.

The nose is complex with hints of vanilla. The palate is smooth and medium balanced with oak, fruit, and spice. The finish is lingering with sweet dried fruit, oak, and spice.