Be the first to review this product
As the most mature expression in the Glendullan stable, this Singleton release is matured for 18 years in ex-bourbon barrels.
Add to Wish List
Notify me when this product is back in stock.

Glendullan is situated in Dufftown, the Whisky capital of the world. As one of the busiest Whisky epicenters, it is home to some of the greatest Scotch Whiskies ever created. Founded in 1898, by William Williams & Sons from Aberdeen, the distillery was actually decreed by King Edward VII in 1902.

The Singleton brand is actually manufactured in three Scottish Whisky distilleries; one of which is Glendullan. This 18 Year expression, along with the younger expressions from the singleton lineup (a 15 and a 12 year), was released in the US in 2016.

With its notes of chocolate, banana almond, and honey, this Speyside single malt is matured using mostly ex-bourbon American oak barrels, and bottled at 40% ABV. As the most mature expression in the Glendullan stable, its structure shines through and takes center stage, while sweet fruit complements the palate all throughout. This well-balanced character is rounded off by a smooth, dry finish.

Chocolate, banana and almond, toasted marshmallow and honeycomb, a subtle scorched wood on the nose. Sweet toffee on the palate, followed by toasted coconut, cocoa, and nutty flavors. The finish is long lasting. 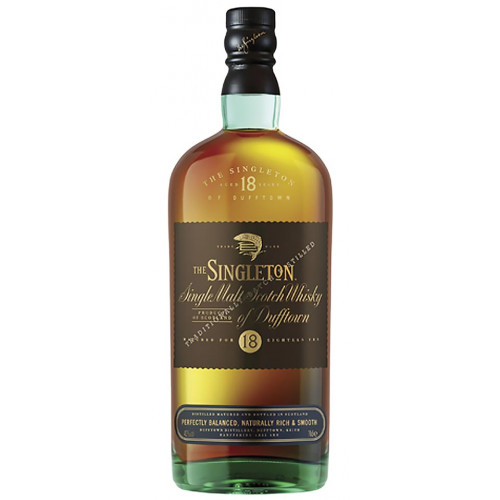