Size700mL Proof108 (54% ABV)
The 24th release in the Monologue series was distilled in 2009 at Benrinnes, a Speyside distillery known for its light, fruity, and meaty single malts. Matured in an ex-bourbon hogshead and briefly finished in an Oloroso hogshead, the barrel yielded a total of 299 bottles of this refined 12-year-old.
Notify me when this product is back in stock. 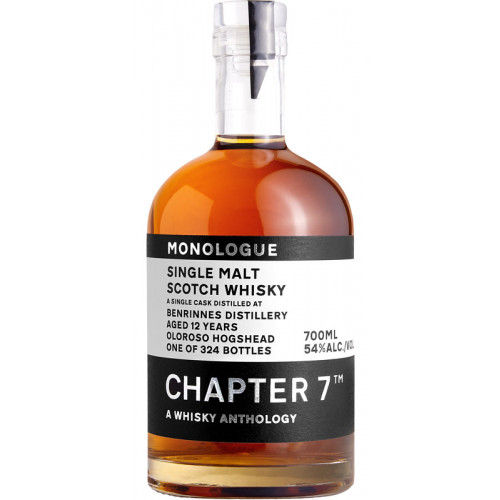 Monologue #24 was distilled in 2009 at the Benrinnes distillery. This Speyside single malt is known for its light, fruity, and meaty character. The single cask was initially aged in an ex-bourbon hogshead before being finished briefly in an Oloroso sherry hogshead, adding hints of prunes, sultanas, and spice. Bottled in 2022 at 104 proof without chill-filtration and coloring, a total of 299 bottles of this 12-year-old single malt were produced.

Get your bottle of this 12-year-old rare whisky today!

Bottled at ideal strength, this 104-proof whisky opens with almond, quince, custard, gooseberry, and pancake aromas. Look for marzipan, almond, gooseberry, lemon, and pastry notes on the palate, culminating in a finish with honey, lemon, and butter.