Size750mL Proof97.6 (48.8% ABV)
The Glenrothes Whisky Maker's Cut is inspired and shaped by the hand of Master Whisky Maker, Gordon Motion, using only the finest first-fill sherry seasoned casks and bottled at his preferred strength of 48.8% ABV. It has been awarded a Gold Medal at the 2019 San Francisco World Spirits Competition and 96 points & Finalist at the 2020 Ultimate Spirits Challenge. 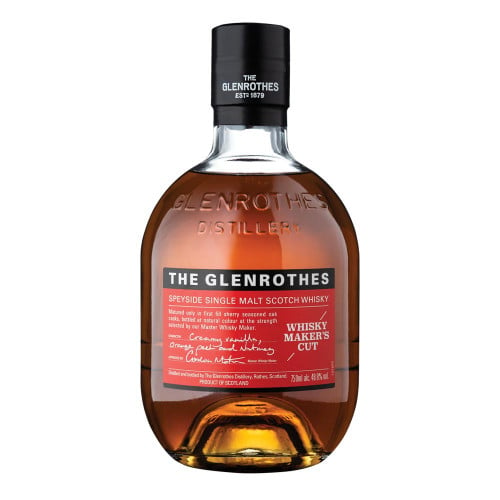 The Glenrothes is an award-winning single malt Scotch whisky from the town of Rothes in Speyside, Scotland’s Scotch whisky making heartland. The distillery has a storied history that dates back to 1879 — that is how long it has been crafting one of the world’s finest whisky.

A combination of many factors, including slow distillation in tall copper stills and maturation in exceptional oak casks deliver expressions with their own unique personalities, underpinned by distinctive the hallmark characteristics of the distillery — ripe fruits, citrus, vanilla and an exquisite spicy finish all encased in the creamiest of textures and with a complex and well-poised balance.

Long known for their vintage statements, this new range of whiskies is a departure from that tradition. These new age statement whiskies have been released as a part of their core line up. The unrivaled quality and extraordinary character of the distillery remain the same.

The Glenrothes Whisky Maker's Cut is inspired and shaped by the hand of Master Whisky Maker, Gordon Motion, using only the finest first-fill sherry seasoned casks and bottled at his preferred strength of 48.8% ABV. It has been awarded a Gold Medal at the 2019 San Francisco World Spirits Competition and 96 points & Finalist at the 2020 Ultimate Spirits Challenge.

Resinous, orange, baking spice and blackberry notes on the nose. The palate is rich and creamy with baked sweets, exotic red fruits and earthy nuttiness. The finish is long and fruity, with orange peel notes and a hint of nutmeg.