Size750mL Proof80 (40% ABV)
The lightly peated single malt has a milder sweeter character than most of Ardmore’s traditionally peated whiskies. An ideal gateway drinker for peated whisky novice.
Notify me when this product is back in stock. 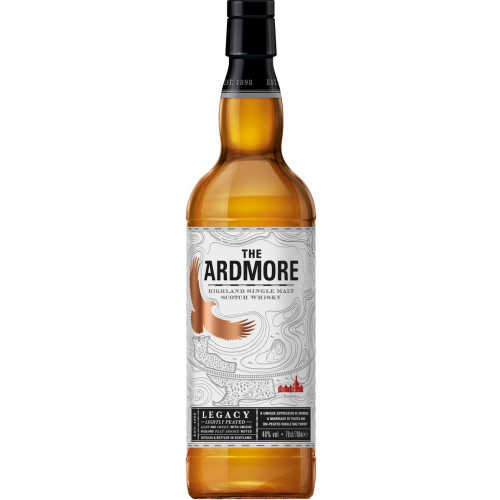 Ardmore’s distinctiveness transcends its whisky. Its mighty Victorian distillery is a sight to behold, nestled incongruously amongst the placid Highland countryside, home to the rarity that is the peated Highland single malt. Adam teacher was the son of a Glasgow blender, William Teacher. In 1898, Adam set out to build a family run distillery, in the Highlands of Aberdeenshire, to supply a steady supply of Whisky to support their famous blend—Teacher’s Highland Cream.

Located in rural Aberdeenshire just outside of Kennethmont, the land was owned by a family friend Col. Leith-Hay. The facility location proved most ideal, having its own water supply, and nearby peat and barley sources. The railway even ran directly alongside the distillery. Their stills remained coal-fed until 2001. Specializing in blends, Ardmore remains one of the few distilleries that produce their highland malts in a peated style.

Ardmore Legacy was released in 2014. The lightly peated single malt has a milder sweeter character than most of Ardmore’s traditionally peated whiskies. An ideal gateway drinker for the peated whisky novice, this whisky combines notes of creamy vanilla, smoky charcoal, sweet honey and savory spices. It is a full-bodied, smooth single malt with the traditional Ardmore dry, spicy, smoky notes.

Ardmore also has shares a unique connection to another rarity; the golden eagle. This eagle has a longstanding association with the brand, with rare golden eagles often seen riding the thermals above the distillery. The Ardmore fully supports protecting these birds even partnering with Royal Society for the Protection of Birds Scotland, with the reintroduction of the white-tailed eagle, a close cousin of the golden eagle.

This expression prominently features the golden eagle as the center of its packaging design and bottle label. The copper foil eagle is depicted full flight, soaring over Ardmore’s iconic distillery.

On the nose are aromas of subtle peat smoke, and honey with hints of cinnamon and toffee bonbon. The palate is creamy with vanilla spice, and smoky charcoal notes, balanced by sweet honey and spice. The finish is full bodied and dry, with spicy, tangy notes.