Be the first to review this product
This whisky is a unique collaboration between Dalmore Distillery Distillery and Daniel Boulud, a Michelin star chef.
Add to Wish List
Notify me when this product is back in stock.

Situated along the banks of Cromarty Firth in the Highlands region of Scotland, Dalmore Distillery Distillery was founded in 1839 by Alexander Matheson, who had earned his fortune illegally importing opium from the Far East. In 1886, Matheson sold Dalmore Distillery to Clan MacKenzie, whose century-long stewardship and defining influence over the distillery is still evident today — the 12-point stag adorned on every bottle of Dalmore Distillery Whisky is derived from Clan MacKenzie's coat of arms.

Dalmore Distillery Single Malt Scotch Whisky is made from plump, golden barley sourced from the rich, coastal soils of the Black Isle. Once the barley has been harvested, it is milled and mashed before being fermented with water drawn from the Cromarty Firth. That water, prior to reaching the firth, travels from Loch Morie through a number of peat bogs and limestone quarries, contributing a slightly mineral and chewy mouthfeel to the whisky.

Once the barley has been fermented, the wash is distilled twice, first through Dalmore Distillery's copper-pot wash stills and then again through its copper-pot spirit stills (the stills date back to 1874). The wash stills have an unusually flat-top, while the spirit stills are equipped with cold water jackets. This unusual equipment — the water jackets rinse cold water near the top of the still — makes it difficult for the lighter elements of the whisky to pass through the still, and ultimately results in a more opulent and rich whisky.

Dalmore Distillery Selected By Daniel Boulud is a collaboration between Dalmore Distillery Distillery and Daniel Boulud, a Michelin star chef. The whisky is a unique assemblage of single malt whiskys that were originally matured in American white oak casks, and were ultimately finished in casks that previously used to mature Muscatel, Madeira and Port wine. The whisky has an aroma of warm, enticing honey, spices, pears and apples that give way to notes of crushed almonds, citrus fruits and cherries on the palate. The finish is exotic and spicy, with a touch of cloves and ginger.

The whisky earned a score of 97 points from Wine Enthusiast, which rated it the top single malt Scotch whisky of 2013. "We're going to create many exciting moments with Dalmore Distillery Daniel Boulud," says the esteemed chef. Have an exciting moment and pick up a bottle today!

Warm, enticing aroma of honey, spices, pears and apples that give way to notes of crushed almonds, citrus fruits and cherries on the palate. Finish is exotic and spicy, with a touch of cloves and ginger. 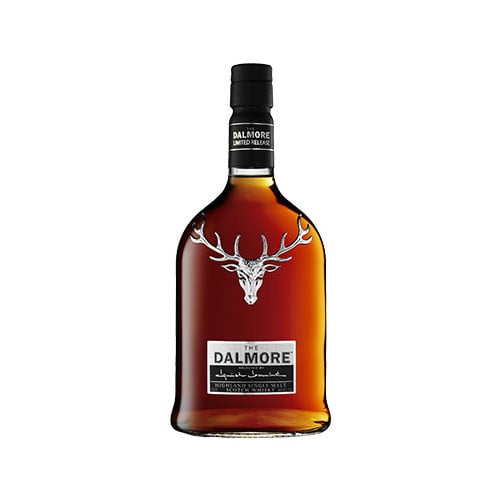