Be the first to review this product
Aged for 21 years and finished in Caribbean rum casks, this whisky earned a score of 93 points from the Beverage Testing Institute.
$255.99
Add to Wish List

Glenfiddich 21 Year Old Gran Reserva Single Malt Scotch Whisky is matured for 21 years in traditional oak casks. After its initial maturation, the whisky is double-barreled, or finished, for an additional four months in casks that were previously used to mature Caribbean rum. As a result of this finishing process, the whisky has a dark golden color, along with an aroma of figs, bananas, toffee and new leather. The aroma gives way to notes of pepper, oak, citrus, ginger and spices on the palate, and leads to a long, warming finish.

The whisky earned the Double Gold Medal at the San Francisco World Spirits Competition in 2010, 2011 and 2013, and earned a score of 93 points from the Beverage Testing Institute. Pick up a bottle today!

Dark golden color, along with an aroma of figs, bananas, toffee and new leather. Notes of pepper, oak, citrus, ginger and spices on the palate. Long, warming finish 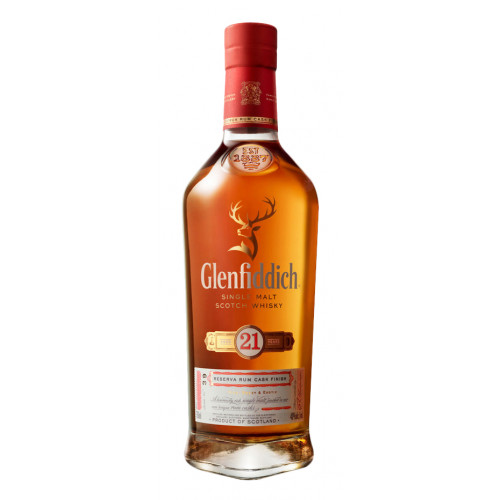