Learn more
Size750mL Proof86 (43% ABV) *Please note that the ABV of this bottle may vary
Aged for 21 years, this whisky earned a score of 95 points and was rated "Extraordinary"at the 2013 Ultimate Spirits Challenge.

This product is available in: AZ, DC, NY Unfortunately, we can't ship to PO Boxes and APO addresses. 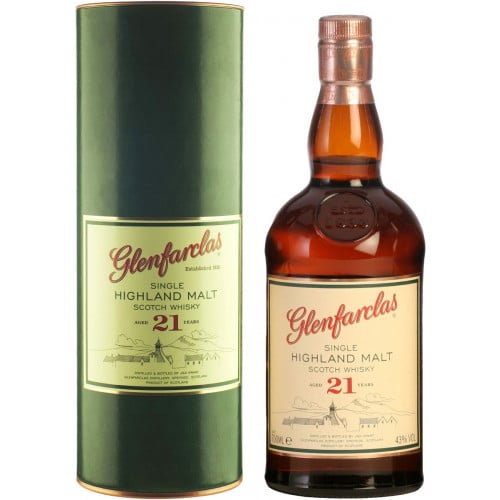 When Grant passed away in 1889, he left the estate to his son George. George died shortly thereafter and his children, also named George and John Grant, took control of the distillery. After saving the distillery from the brink of bankruptcy, the Grant Brothers modernized and expanded the operations such that in May 1912, a rival distiller wrote: "of all the whiskies, malt is king — of all the kings, Glenfarclas reigns supreme."

Glenfarclas 21 Year Old Single Malt Scotch Whisky is made from freshly harvested barley, which is steeped in water sourced from the heather-clad slopes of the Ben Rinnes mountain. The crystal-clear spring water, which cascades down the 3,000-foot mountain through peat and granite, is the lifeblood of the Glenfarclas Distillery. After the barley is malted, it is milled and mashed before being fermented using 100% cultured distiller's yeast.

The wash — the liquid that remains after fermentation — is then distilled twice through Glenfarclas's copper-pot stills. While most distilleries use steam-powered stills (because they are more efficient and preserve the lifespan of the still), Glenfarclas Distillery continues to use traditional direct-heated stills in order to preserve the traditional flavors of the whisky. After distillation, the heads and tails (the whisky produced at the beginning and end of the distillation process) are discarded, and only about 15% of the distillate — the heart of hearts — is preserved for maturation.

Glenfarclas 21 Year Old Single Malt Scotch Whisky is matured for 21 years in a combination of ex-bourbon casks and ex-sherry casks (the sherry casks had previously matured Oloroso and Fino sherry in Seville, Spain). As a result, the single malt has an aroma of butterscotch and dried fruits, which gives way to full-bodied and rounded notes of chocolate, cherries and a touch of smoke and honey. The lingering finish has hints of toffee and caramel.

Glenfarclas 21 YO Single Malt Scotch Whisky earned a score of 95 points at the Ultimate Spirits Challenge in 2013, and was rated "extraordinary."

We have only a handful of bottles in stock. Pick one up today!

Aroma of butterscotch and dried fruits, which gives way to full-bodied and rounded notes of chocolate, cherries and a touch of smoke and honey. Lingering finish has hints of toffee and caramel.