Size600mL Proof80 (40% ABV) - Various
A collection of 3 distinct single malt whisky styles of Scotland. Lagavulin 16YO from the south of Islay, Cragganmore 12YO from Speyside and Talisker 10YO from the Isle of Skye offer the best of Scotland.
Notify me when this product is back in stock. 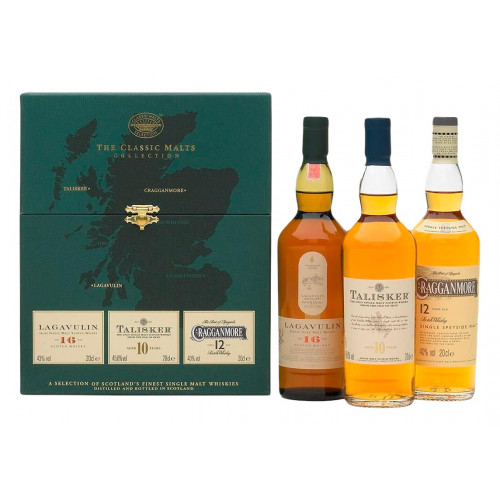 A selection of Scotland’s finest single malt whiskies, The Classic Malts Collection introduces you to three 20 cl. bottles: Lagavulin 16YO, Cragganmore 12YO and Talisker 10YO. Each bottle represents its own distinct whisky style and the collection is a wonderful overview of classic single malt expressions of Scotland.

One of the oldest distilleries on Islay, Lagavulin distillery was founded in 1816 on the south of the Island of Islay and today, it’s owned by Diageo. Famous for their slow distillation process and pear-shaped pot stills, the signature Lagavulin style is intensely flavored, smoky and rich. Known as "the king of Islay", Lagavulin 16 Year Old Single Malt Scotch Whisky is aged in oak casks for at least 16 years. With a strong peaty and smoky character, this is a rich and dry expression with a full body and distinct salty notes. An elegant whisky that should be in every single malt enthusiast’s home bar.

Situated in the village of Ballindalloch in Banffshire Speyside, Cragganmore was founded in 1869 by John Smith. Considered the most complex aroma on Speyside, Cragganmore range offers whisky of great appeal and depth. Cragganmore 12 Year Old is a complex and rich expression with multi-layered flavors and a smoky finish. Awarded Gold at the Scotch Whisky Masters in 2010 and 2011, this gold Speyside single malt has a rounded body with a strong malty taste and hints of sweet wood smoke and sandalwood.

Talisker Distillery was built in 1830 on the shore of Loch Harport in Carbost and it's the only distillery on the Isle of Skye. The spectacular terroir of Skye is the inspiration behind the Talisker range, producing premium single malt whiskies with a powerfully invigorating character, reflecting the rugged shores of the island. Talisker 10 Year Old is an extremely popular expression, adored for its typical spicy and peaty character with a distinct ocean influence.


Get your The Classic Malts Collection and discover the single malts of Scotland!

Three distinct single malt styles of Scotland. Lagavulin 16YO is full and rich bodied with an intensely peaty nose with notes of seaweed. The palate is dry, peaty and smoky. The finish is long and elegant. Cragganmore 12YO has a firm and round body. The nose is sweet and floral with honey and vanilla. The palate is malty and slightly woody and sweet. The finish is long and malt-driven. Talisker 10YO offers a fresh and fragrant nose, a peaty and peppery palate complimented by a touch of brine. The finish is lingering.