Size750mL Proof93.6 (46.8% ABV)
Rock Oyster (or Rock Island) is a blend of malt whiskies from the islands of Jura, Islay, Arran, and Orkney. Bottled at 93.6 proof without chill filtration and coloring, it's an expression that invokes the sea.
Notify me when this product is back in stock. 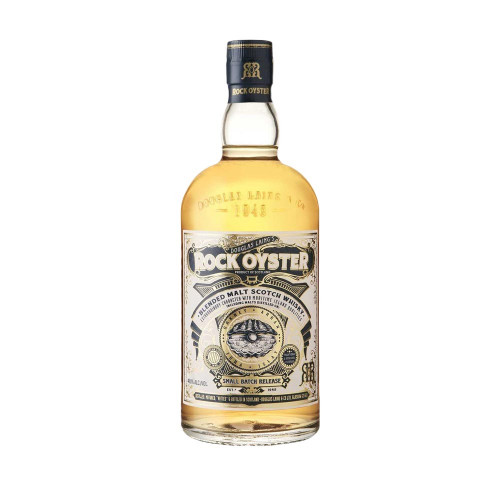 Established in 1948 by Fred Douglas Laing, Douglas Laing & Co is an Independent Scotch bottler. Based in Glasgow, Scotland, the company produces a number of brands including their Remarkable Regional Malts range, featuring expressions like The Epicurean, Scallywag, Rock Oyster (Rock Island), Big Peat, and Timorous Beastie, among several others. The family-owned business is in its third generation and specializes in artisan, small-batch, and single cask bottlings.

Their Remarkable Regional Malts series explores the various regions of whisky through single malt, single grain, and blended expressions. The Rock Oyster (Rock Island) Blended Malt Scotch Whisky takes you to the whisky islands of Jura, Islay, Arran, and Orkney, and the single malts, known for their maritime, smoky profiles. Bottled at 93.6 proof without chill filtration and coloring, it's a briny small-batch expression with sweet peat, honey, and pepper notes.

Grab your bottle of this maritime smoky whisky today!

The nose opens with briny maritime aromas, as well as vanilla, lemon zest, and a touch of smoke. On the palate, you'll find soft and sweet peat and smoke, honey, ash, licorice, and white pepper. The finish has the notes lingering, begging for another sip.