Size750mL Proof97.2 (48.6% ABV)
Distilled in 1978, this 35-year-old masterpiece is some of the last surviving whisky from the now mothballed Brora Distillery.
Notify me when this product is back in stock. 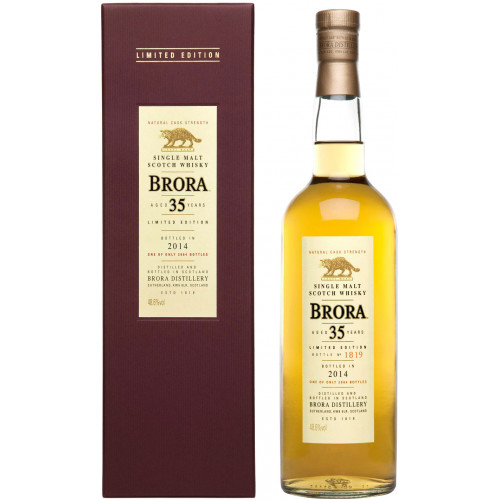 Brora 14th Release 35 Year Old Single Malt Scotch Whisky was distilled at the Brora Distillery in 1978, and is some of the last surviving whisky from the now-shuttered Highlands distillery. Matured in refill American oak and European oak casks for well over three decades, the whisky has an astonishing aroma of creamy fruits, Sauternes, nuts, clean hay and light smoke. The palate is buttery and filled with bittersweet notes of green apples, pineapple, dried wood and salt water taffy, and leads to an impeccable, smoky-yet-balanced finished.

Built in 1819 for just £750 by the Marquess of Stafford (who eventually became the Duke of Sutherland), Brora Distillery was originally known as "Clynelish" and was one of Scotland’s earliest purpose-built malt distilleries. The stills at this early Clynelish were coal-fired, and once electricity came to the forefront of whisky production in the mid-20th century, a new Clynelish Distillery — complete with electric-powered stills — was built in 1967, prompting the renaming of the old Clynelish to "Brora Distillery."

Until 1873, most of the whisky produced at Brora was subsequently supplied to blenders to help address a shortage of Islay whisky at the time. Afterwards, the distillery (which boasted a recently reconstructed mash house) began producing its own whisky in a style somewhere between the lightly peated Highlands and more heavily peated Islay — ultimately, however, Brora couldn’t keep up with the more modern productions methods used at the adjacent Clynelish Distillery, and in 1983 Brora Distillery was mothballed forever.