Size750mL Proof98.6 (49.3% ABV)
A limited-edition expression, this single malt was crafted by marrying together 14 unique casks of whisky. 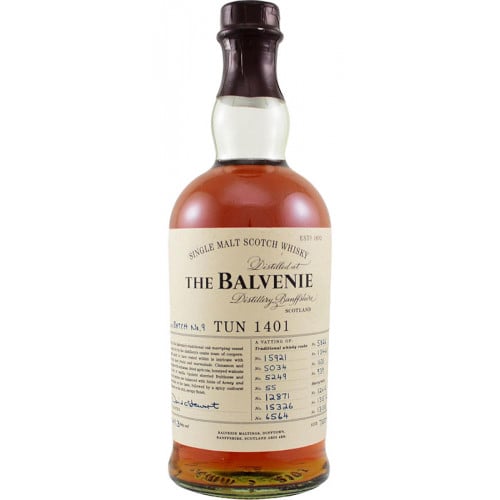 Once the barley has been malted, it is milled and mashed at the distillery before being fermented using a proprietary strain of yeast. Following fermentation, the wash is distilled twice, first through Balvenie's copper-pot wash still and then again through its copper-pot spirit still. "The most important reason for using a copper still,"explains Dennis McBain, Balvenie's coppersmith, "is that it acts as a catalyst. It removes any sulphur which may be carried over from the fermentation process prior to distillation. "McBain, who joined Balvenie Distillery in 1959, is one of the oldest coppersmiths remaining in the industry.

Balvenie Tun 1401 Batch #9 was made by marrying together 14 casks (11 traditional oak casks and 3 sherry butts) of whisky maturing in Warehouse 24. Each of the casks was hand-selected by David Stewart, who has served as Balvenie's Malt Master for the past five decades. Once the whisky was blended together, Stewart rested it for several months in Tun 1401 — one the distillery's unique marrying vessels — to create a single malt that was greater than the sum of its already precious parts.

"We've identified what we believe to be an unprecedented range of liquids to comprise this Tun 1401 batch from the vast library of very rare whisky currently maturing at The Balvenie Distillery," says Stewart. "The end result is a complex and completely unique marriage characterized by dark fruits and marmalade on the nose. Its richness and smoothness is underpinned with dark chocolate sweetness, delicate honey notes and a distinctly long, spicy finish."

Dark fruits, particularly cherries and berries, along with hints of peach jam, apricots and marmalade. Rich and smooth, with touches of cocoa, honey and tropical fruits leading to an exquisite finish.