Learn more
Size750mL Proof92 (46% ABV) *Please note that the ABV of this bottle may vary
Only 200 bottles of this single malt whisky, which was aged for 16 years, were released into the United States market.
Notify me when this product is back in stock. 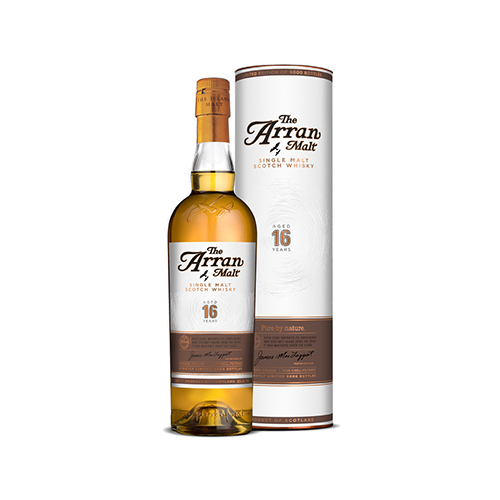 "The reason the distillery was built here," says James MacTaggart, the master distiller at Arran Distillery, "was because there was a very good water supply. In fact, it was tasted and it was decided that it was probably one of the best water supplies in Scotland for making whisky."

The Arran Limited Edition 16 Year Old Single Malt Scotch Whisky represents the oldest expression of whisky produced at Arran Distillery. The whisky is made from unpeated Scottish barley, which is malted and then fermented using a proprietary strain of yeast. Once the barley has been fermented, the wash is distilled twice — first through Arran's copper-pot wash still and then again through Arran's copper-pot spirit still. The stills were custom designed, says MacTaggart, and "shaped to allow the lighter vapors to come up through the stills." As a result, Arran Single Malt Scotch Whisky has an appreciably softer and more delicate flavor profile.

Following distillation, a portion of The Arran 16YO Single Malt (70%) is matured in American oak casks that were previously used to mature bourbon, while the remainder (30%) is matured in Spanish oak casks that were previously used to mature sherry. The bourbon casks contribute notes of spicy cinnamon, oak and honey to the whisky, which is complemented by the notes of dark fruits (particularly cherries) and lush citrus added by the sherry casks. In addition, the Isle of Arran's unique microclimate — the Isle enjoys a warm Gulf Stream and cool, breezy summers — contributes a hint of salty tang to the whisky as it matures.

Once the whisky has matured for 16 years (the longest maturation period of any Arran whisky ever released), the whisky is brought to proof using water sourced from Loch na Davie. The loch is situated in the hills that overlook the village of Lochranza, and the water sourced from it is filtered through granite and softened by peat before it arrives at the distillery.

"Our first 16 year old whisky encapsulates everything that is great and unique about Isle of Arran malt whiskies," says MacTaggart. "The spirit is non-chill filtered and contains no artificial colours so it retains a full range of aromas and flavours "“ it smells of honey and ginger and has a smooth taste with waves of sweetness and spice."

Only 200 bottles of The Arran 16YO Single Malt were released into the United States. Pick up a limited edition whisky today!

Aroma of ginger, honey and oak. Notes of citrus and dark fruits that are complemented by hints of cinnamon, oak and honey, and lead to a long, chewy finish.