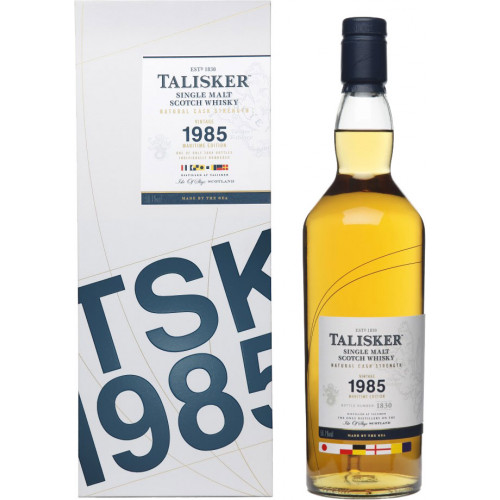 Talisker 1985 Single Malt Scotch Whisky was distilled in 1985 and matured in refill American oak casks for 27 years before being bottled at cask strength. Released as part of Diageo's 2013 Special Release Whiskies, it has an aroma of toffee, cinnamon bark, orange and earthy minerals that give way to touches of smoke, honey, cloves and ginger on the palate. The texture is bold and complex, with accentuated notes of milk chocolate and salty brine leading to an ever-lasting finish that is slightly spicy. The whisky earned a score of 92 points from Whisky Advocate, which named it one of the top ten spirits in Spring 2014 edition.

"Making Talisker demands long hours and no compromises, so I tour the distillery several times a day making sure no part of the process betrays the rest," says Lochhead. Only 3,000 bottles of this whisky have ever been made. Pick one up today!

Aroma of toffee, cinnamon bark, orange and earthy minerals that give way to touches of smoke, honey, cloves and ginger on the palate. Texture is bold and complex, with accentuated notes of milk chocolate and salty brine leading to an ever-lasting finish that is slightly spicy.