Size750mL Proof92 (46% ABV)
This whiskey, which was named Best Grain Whiskey at the World Whiskies Awards in 2014, was aged in ex-Cabernet Sauvignon barrels from California.
Notify me when this product is back in stock. 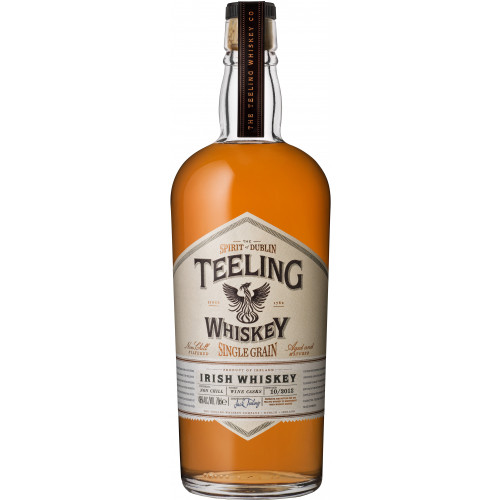 In 1782, Walter Teeling opened a distillery along Marrowbone Lane in Dublin, Ireland. At the time, nearly 40 independent distilleries dotted the rolling Irish landscape, the majority of which were centralized in the industrial engine room of the city — the Liberties. "Since 1782 the Teeling family has been crafting Irish Whiskey," says Jack Teeling, the founder of the Teeling Whiskey Company. "The entrepreneurial spirit that inspired Walter Teeling back in the 18th century has not been diluted over the years and the latest generation of Teelings are committed to innovating and creating unique Irish whiskeys."

Teeling Single Grain Irish Whiskey is crafted from 95% corn and 5% barley, which is milled, mashed and distilled together at the Cooley Distillery in County Louth, Ireland. Much like single malt whiskey, single grain whisky must be produced in a single season at a single distillery. After distillation, Teeling Single Grain Irish Whiskey is fully and rested in ex-Cabernet Sauvignon barrels from California, then bottled in small batches at 92 proof without the use of chill filtration.

As a result of its unique maturation process, Teeling Single Grain Irish Whiskey has a bright golden color, and an aroma of butterscotch, sweet cherries and cake frosting. The palate is packed with deeper flavors, such as oak, chocolate fudge, cinnamon and marshmallow, and leads to a finish accented by raisins, orange peel and coconut.

Teeling Single Grain Whisky earned the Best Grain Whiskey title at the World Whiskies Awards in 2014, and is now available in the U.S. for the first time ever.

Bright golden color, and an aroma of butterscotch, sweet cherries and cake frosting. Palate is packed with deeper flavors, such as oak, chocolate fudge, cinnamon and marshmallow, and leads to a finish accented by raisins, orange peel and coconut.