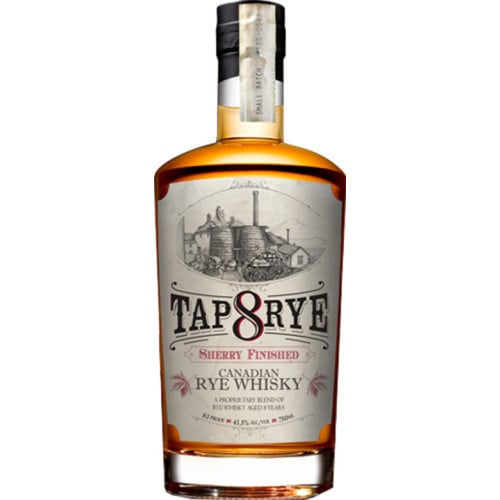 Tap 357 is a marriage of two purely Canadian flavors: maple and rye. The rye whisky, which is produced at one of Canada's oldest distilleries, is distilled four times over and then matured in a combination of new, second and third-use bourbon casks. The bourbon casks add a hint of honey and oak to the whisky, which nicely balances out the earthy, spicy flavor of the rye. After maturation, master blender Michel Marcil blends a combination of three, five and seven year old rye whiskies together with pure Canadian maple syrup sourced from maple trees that were tapped at the first hint of spring in the province of Quebec. The maple-rye combination is then finished in a proprietary process, before each bottle is filled behind a label featuring a hand-drawn illustration of Canadians tapping maple trees.

Tap 357 Canadian Maple Rye Whisky has an aroma of maple syrup that is instantly identifiable but not overwhelming. The subtle sweetness of the maple syrup adds an additional layer of complexity, and is quickly followed by a spicy bite of rye. The finish is long, and has a hint of pine and smokiness.

Tap Rye Port Finished Canadian Rye Whisky is matured for up to eight years in a combination of traditional North American oak casks and casks that were previously used to mature port wine. Once the whisky has matured, it is finished with an aliquot of port wine. "Because Canadian distillers are dealing with a severe shortage of aged rye whisky, Tap Rye Port Finished has been made in a finite, limited quantity," says Michel Marcil. "There will not be another bottling once this small batch is sold out."

Tap Rye Port Finished Canadian Rye Whisky has an aroma of red fruits, berries and plums. The aroma gives way to notes of honey, milk chocolate, dates, figs and nougat that are balanced against a spicy backbone. The finish is gentle and slightly sweet, with a hint of citrus, ginger and rye.

Maple: Aroma of maple syrup that is instantly identifiable but not overwhelming. Subtle sweetness of the maple syrup adds an additional layer of complexity, and is quickly followed by touches of red plums, apples, apricots, honey, rye and ginger. Finish is long, and has a hint of smokiness.